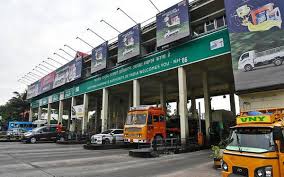 CHENNAI: Observing that the fee collected by the National Highways Authority of India (NHAI) at its toll plazas in Tamil Nadu were high, compared to the facilities provided, the Madras High Court on Thursday advised NHAI to improve the infrastructural facilities there.

The introduction of FasTag, a computerised toll collection system, has not eased the congestion along the toll plazas, noted the first bench of Chief Justice Sanjib Banerjee and Justice Senthilkumar Ramamoorthy.

The bench made the observation when a PIL from Tiruchirappalli-based advocate A Joseph Sahayaraj came up for further hearing on Thursday.

The petition sought to restrain NHAI from collecting toll fees from vehicles plying through Paranur toll plaza on the Tambaram-Tindivanam stretch, as the concession agreement had already expired.

Petitioner’s counsel told the judges that the NHAI was entitled to collect only 40 per cent as per Rule 6 ((6)(b)) of NH Fee (Determination of Rates and Collection) Rules, 2008.

Only a provisional completion certificate had been issued for the plaza. But it was allowed to collect the full toll. It glaringly exposed very many deficiencies in service, he added.

“There has to be some amount of infrastructural setup prior to introducing FasTag,” the bench said, adding that it resulted in the plazas remaining inaccessible to many and congestion at the plazas.