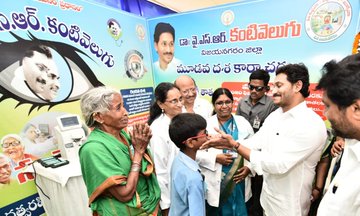 AMARAVATI: Andhra Pradesh Chief Minister Y S Jagan Mohan Reddy on Monday launched yet another scheme named after him ‘Jagananna Vasthi Deevena’ under which a financial assistance of Rs 2,300 crore would be provided to students pursuing various post-Intermediate courses to meet hostel and mess expenses.

The Chief Minister launched the programme in Vizianagaram district in north coastal Andhra.

In all 11,87,904 students pursuing ITI, polytechnic, under-graduate and post-graduate education would benefit from the scheme, according to the Chief Minister’s Office.

The total Rs 2,300 crore would be distributed to students in two instalments, in February and July every year, and credited directly into the bank accounts of the students’ mothers.

A unique bar-coded smart card would be issued to each beneficiary to draw the benefits of the JVD scheme.

The card contains complete details of the student.

The objective of the JVD scheme, according to the CMO, was to improve the gross enrolment ratio in higher education (post-Intermediate), which was just 23 per cent in the state right now.

The Chief Minister later inaugurated the ‘Disha’ police station in Vizianagaram, meant exclusively for the protection of women and children and deal with cases of atrocities against them.