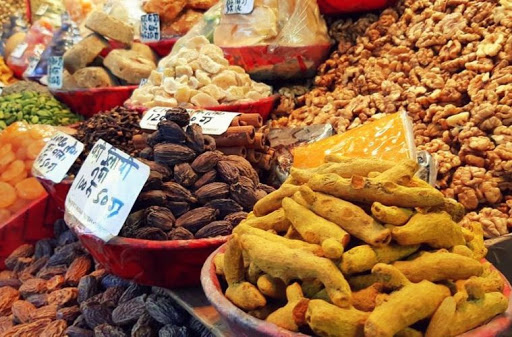 NEW DELHI: The centuries old wholesale spice market, Khari Bawli, a paradise for spice connoisseurs and dealers, and nightmare for those who dread crowd, wore a deserted look on Monday with barely 10-12 shops open and no buyers around.

In normal days, business continues amid chaos caused by carriages parked in the middle of road, shops extending to the footpath, and thousands trying to elbow each other in this market, known for spices and dry fruits.

“We have enough stock of red chillies and other spices, like coriander powder, black pepper, cardamom (elaichi) and cumin (jeera). But there are only few buyers. We have Patna and Kashmiri chillies. But hardly anyone to sell to,” said Krishna Mittal, a shop owner in the market, who opened the outlet as soon as the government relaxed lockdown norms.

There were only one white van and a couple of personal vehicles on the road in the market where finding parking space in normal days is next to impossible. Few carriages were parked and locked outside shut shops. Majority of the labour force — migrants workers from UP and Bihar — have left for their native places.

The area outside Hari Ram”s shop on the main road always remained cluttered. But since the lockdown, deafening silence has replaced that. Such is the situation that chirping of birds could be heard.

A shop owner, who opened his outlet only to take out some necessary documents, told IANS, most outstation traders were not coming as Delhi was a red zone. “They used to buy in bulk. Moreover, no hotels and catering companies are buying ingredients either,” said Shiv Parshad, a trader.

Khari Baoli is not only the largest spice market of Asia but also an important and busy commercial district catering to the North, West and Central India.

From organic tea to rare whole spices, like degi mirch, Khari Bawli offers every spice needed from this congested space next to Delhi”s Sadar Bazar area.

Raghvir Jaiswal, another shop owners who opened his outlet, told IANS, “You know how chock-a-block this area used to be. Today there are no buyers. The few who are coming are buying like retailers. No bulk buyer is coming.”