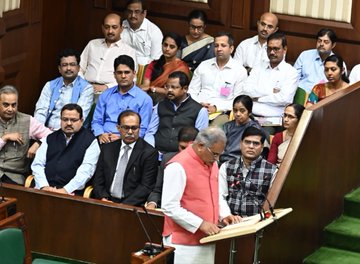 Among other things, he announced a new scheme, `Rajiv Gandhi Kisaan Nyay Yojana’, to provide good returns to farmers for agricultural produce with a provision of Rs 5,100 crore.

“With the spirit of `Gadhbo Nava Chhattisgarh (building a new Chhattisgarh), the budget is primarily focused on nutrition, betterment and extension of health services and productive use of the youth’s energy to develop them as a powerful resource,” said Baghel, who holds finance portfolio.

The budget also embodies the objective `Sarve Bhavantu Sukhinah, Sarve Santu Niramayah’ (Let everyone be happy and healthy), he said.

“The Central Government had given special exemption to purchase paddy at support price along with bonus distribution to the previous government. But this year the state could not get this exemption from the Centre,” Baghel said.

“Therefore, to ensure appropriate benefit to the `Annadata’ (provider of food), the Rajiv Gandhi Kisan Nyay Yojana will be launched,” he said. The benefit of the scheme will also be extended retrospectively for 2019-20, he added.

Under the `Krishak Jeevan Jyoti Yojana’, a provision of Rs 2,300 crore has been made for free power supply to agri-pumps upto five Horse Power capacity, he said.

As many as 1176 biogas plants would be set up under the Gobar Dhan Yojana for which a provision of Rs 450 crore has been made, he said.

`Gurukul Vidyalaya’ (residential school) will be set up in Giraudhpuri, the birthplace of spiritual leader Baba Guru Ghasidas, the chief minister announced.

Laboratories for the Internet of Things and robotics will be set up at three engineering colleges and five polytechnics in the state.

Tuition fees of students from Chhattisgarh who make it to IITs, IIMs and All India Institutes of Medical Sciences (AIIMS) will be borne by the state government, and on graduation they will be directly recruited in government and semi-government institutions, Baghel said.

To check cyber crime, cyber police stations will be established under the limits of every Inspector General of Police range. A Jail Reform Commission will be set up for improving the state’s prison, the CM added.

An arbitration centre was proposed to be set up at the High Court at Bilaspur and all civil district courts.

A provision of Rs 7.20 crore has been made for automated Air Traffic Control (ATC) towers at Jagdalpur, Ambikapur and Bilaspur airports, while Rs 1 crore is earmarked for construction of air strip at Baikunthpur, Korea district.

`Shahid Smarak’ (martyrs’ memorial) will be built in Nawa Raipur Atal Nagar in the memory of Congress leaders and security personnel killed in the May 2013 Jhiram Valley naxal attack, Baghel announced.

Overall, the budget for 2020-21 earmarks 38 per cent funds for the social sector, 40 percent for the economic sector and 22 percent for the general service sector, he said.

Estimated gross expenditure for 2020-21 is Rs 1,02,907 crore. The net expenditure, after deducting repayment of debt and recoveries, is estimated at Rs 95,650 crore.

The state is estimated to have surplus revenue of Rs 2,431 crore, as in previous years. Fiscal deficit (which factors in debt repayment liability) is estimated to be Rs 11,518 crore, which is 3.18 percent of the state’s estimated gross domestic product (GDP) for 2020-21, little above the prescribed limit of 3 percent, Baghel said.