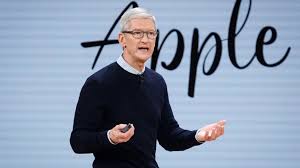 SAN FRANCISCO:Stressing that big companies deserve scrutiny, Apple CEO Tim Cook has said that his company conducts itself with utmost integrity and professionalism.

Speaking at The Atlantic Festival on Monday where he discussed privacy, antitrust issues and his relationship with US President Donald Trump, Cook said Apple has no monopoly over the global markets, reports MacRumors.

“I have no issue at all in Apple being put underneath the microscope and people looking and probing. My hope is that as people heard our story and as they continue to hear our story that it will become as apparent to them as it is to us that we have no monopoly. There is no monopoly here,” Cook was quoted as saying

On the ongoing US antitrust investigation into big tech firms, Cook said that “big companies deserve scrutiny,” something that’s “fair but important” for the American government.

Apple has faced criticism in several markets including in the US and Europe for the App Store fees, with the European Commission opening formal antitrust investigations to assess whether Apple’s rules for app developers on the distribution of apps via the App Store violate EU competition rules.

Cook said that their core strategy will never produce a monopoly.

“It’s very rare, almost impossible for the best to become the most as well. Somebody will choose a commodity product and there’s enough people that will buy the commodity product that it will have more share. And that’s true in all of the different fields we’re in”.

“We don’t focus on politics. And so it keeps us out of the sort of the daily scrum of politics and keeps us very focused on the things that are very important to us,” he added.

On remote work, Cook said he can’t wait for “everybody to be able to come back”.

“For things like creativity, you depend on people kind of running into each other over the course of a day. We have designed our entire office such that there are common areas where people congregate and talk about different things. And you can’t schedule those times”.

“We’ve got about 10-15 per cent working today in the office. I’m in the office at different points during the week as well, but the vast majority, 85 to 90 per cent of the company is still working remotely”.