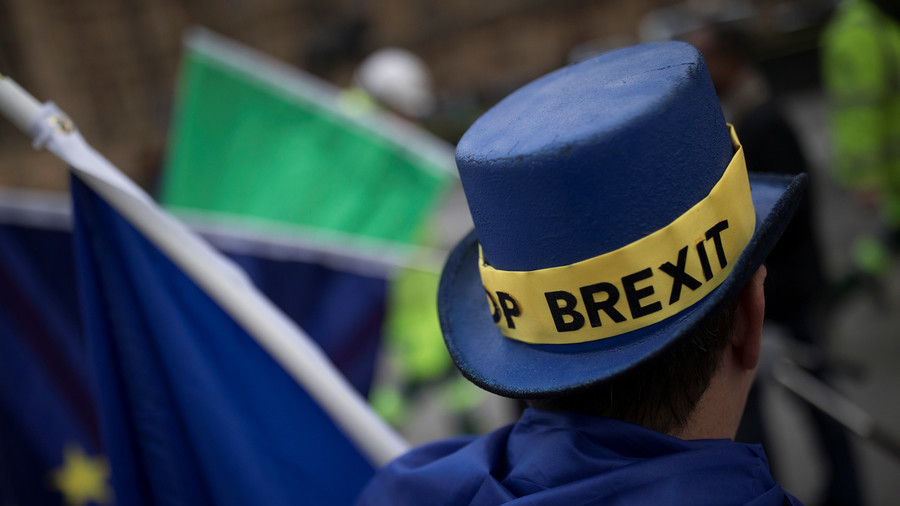 BRUSSELS: European (EU) leaders moved quickly on Tuesday to reject an attempt by Britain’s Prime Minister Theresa May to re-open talks on the Brexit divorce deal, as British lawmakers voted to demand changes.

When May signed the withdrawal agreement in November, both she and the other 27 EU leaders hailed it as the only way to avoid Britain crashing out of the bloc on March 29 without a plan.

But the embattled British premier failed to sell the agreement to her own parliament, which on Tuesday voted to send her back to demand that the deal be stripped of the “Irish backstop”, a clause created to keep the border open with Ireland.

May’s call got short shrift from EU Council president Donald Tusk, who called round the other 27 EU capitals to coordinate a response and issued a firm statement ruling out renegotiation.

“We continue to urge the UK government to clarify its intentions with respect to the next steps as soon as possible,” Tusk’s spokesman said.

“The Withdrawal Agreement is and remains the best and only way to ensure an orderly withdrawal of the United Kingdom from the European Union.

Nevertheless, the spokesman repeated the longstanding EU position that the other members could find a way of tweaking a political declaration that was issued with the withdrawal deal.

If Britain makes a “reasoned request” to extend the Brexit deadline beyond March 29, this could be arranged if the other 27 leaders agree.

“If the UK’s intentions for the future partnership were to evolve, the EU would be prepared to reconsider its offer and adjust the content and the level of ambition of the political declaration,” he said.

This is a restatement of Brussels’ offer to May that, if she is willing to reverse her opposition to Britain remaining in the EU customs union, then a broad trade deal could be possible.

This in turn would make the backstop irrelevant, since it would only be invoked to prevent the return of a hard border between EU member Ireland and the British province of Northern Ireland.

But, crucially, even this offer was only for a more ambitious political declaration — a non-binding roadmap to future ties — and would not involve rescinding the withdrawal agreement.

“We will continue our preparations for all outcomes, including a no-deal scenario. We will also continue the EU’s process of ratification of the agreement reached with the UK government,” the official said.

Tusk’s response mirrored that of France’s President Emmanuel Macron, who had earlier warned May not to expect Europe to bend to British demands.

During a regional summit in Cyprus, Macron declared that the existing Brexit deal is the “best agreement possible and is not renegotiable”.

Macron urged London to “promptly” lay out to EU chief negotiator Michel Barnier “the next steps that will prevent an exit without an agreement, which nobody wants but for which we must all prepare ourselves”.

Barnier himself had no immediate reaction to the British decision, and his boss EU Commission president Jean-Claude Juncker is due to address the crisis on Wednesday in a speech to the EU parliament.

But on Monday, Barnier’s deputy Sabine Weyand had laid out the situation in stark terms, chiding May for failing to sell the hard-won agreement even to her own eurosceptic ministers.

“There is a very real risk of crash out. Not by design but by accident,” Weyand said, noting that if Britain’s position does no change then it automatically leaves Europe without a deal on March 29.

Throughout the negotiations, Brussels has been clear that it stands by Ireland — a continuing member with much to lose from any disorderly Brexit.

On Tuesday, Irish foreign minister Simon Coveney insisted again that the backstop remains necessary “and tonight’s developments at Westminster do nothing to change this”.

Finally, even if the EU capitals agreed to re-open the deal and the Commission negotiated a backstop free text, leading members of the EU Parliament have warned they would not ratify it.

The centre-left Socialists and Democrats group and the Greens both issued statements after the British vote restating this.