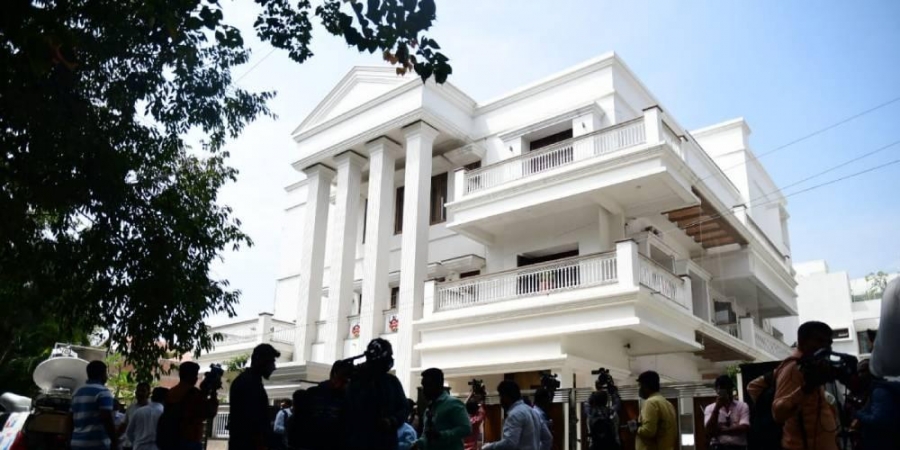 BENGALURU: After a day-long search operation in 14 properties spread across three states allegedly owned by Karnataka’s powerful Congress leader D.K. Shivakumar, the Central Bureau of Investigations (CBI) on Monday registered a case of amassing Rs 74.93 crore worth assets disproportionate to his known sources of income.

A statement released by the CBI stated that it has registered a case against former Karnataka minister (presently MLA) Shivakumar on allegations of possessing disproportionate assets to the tune of Rs 74.93 crore (approx) in his name and in the name of his family members.

The statement further said that the CBI raided 14 properties linked to the leader in three states — Karnataka, Delhi and Maharashtra.

“Searches were conducted today at 14 locations in Karnataka, Delhi and Mumbai at the premises of Shivakumar and others which led to the recovery of Rs 57 lakh (approx) in cash and several incriminating documents, including property documents, bank related information, computer hard disk etc.,” the statement said, adding that the alleged corruption case against the Karnataka Congress chief was registered by the CBI based on the inputs shared by the Enforcement Directorate over a money laundering probe.

When the CBI sleuths descended to launch widespread raids, which began at around 6.30 a.m., supporters of Shivakumar also started gathering in front of his residence in the upscale Sadashivanagara locality in the city.

As the day progressed, the restless supporters started a flash protest across the key junctions in the city causing traffic jams and throwing social distancing norms to the wind.

Hearing rumours that Shivakumar and his brother and Bengaluru Rural Lok Sabha MP D.K. Suresh could be taken into custody, drama ensued with his supporters trying to “gherao” the CBI sleuths’ vehicles and lay seize on the CBI headquarters in Hebbal. Both bids were foiled by the city police.

The supporters calmed down only after D.K. Suresh took to Twitter to clarify that their family would not be cowed down by such threats.

“We all know who’s behind this. We will fight this till the end and emerge victorious as we are the followers of truth and justice. I appeal to our followers not to protest and cause any inconvenience to the public,” he tweeted.

It can be recalled that last year, the 58-year-old Congress leader was arrested by the Enforcement Directorate (ED) after four days of questioning over money-laundering allegations.

The September 2019 arrest followed tax raids on Shivakumar in 2017, when Rs 8.6 crore “undisclosed income” was allegedly found. The figure was revised to Rs 11 crore later. The ED had filed a money laundering case against Shivakumar in 2018, based on a chargesheet filed by the Income Tax Department.

During the money laundering probe, the ED had forwarded some of their findings to the CBI last year. This is the first CBI case against Shivakumar.

Speaking to reporters earlier in the day, Shivakumar’s family counsel A.S. Ponnana asked if they will keep raiding his house every time there is an election?

“There should be some sanctity – something like the rule of law. This is not a lawful action. I don’t think there is a doubt in anybody’s mind,” he said.

“The public is aware as to why this is happening. The by-elections are announced, he is one of the star campaigners, and he is KPCC president. It is only a politically motivated action and not a legally warranted one,” he added.

Meanwhile, political slugfest continued through out the day, with BJP and Congress leaders taking turns to criticise each other.

Congress leaders termed the episode as “raid raj” and an attempt to “derail the preparations” for the bypolls in the state, while the BJP snubbed the Congress stating that it should stop playing the victim card.

Congress General Secretary, Randeeep Singh Surjewala took to twitter, saying that the insidious game of intimidation and machinations of Modi-Yeddyurappa duo is being executed by a puppet CBI. “CBI should be unearthing the layers of corruption in Yeddyurappa Govt,” he tweeted.

He added, “Let Modi and Yeddyurappa governments and BJP’s frontal organisations i.e CBI-ED-Income Tax know that Congress workers and leaders will not be cowed down nor bow down before such devious attempts. Our resolve to fight for people and expose BJP’s maladministration only becomes stronger.”

Leader of the opposition Siddaramaiah tweeted, “The latest CBI raid on @KPCCPresident @DKShivakumar’s house is another attempt to derail our preparation for bypolls. I strongly condemn this.”

Responding to the searches, the ex-Karnataka Chief Minister added: “@BJP4India has always tried to indulge in vindictive politics & mislead public attention. The latest CBI raid on @KPCCPresident @DKShivakuma ‘s house is another attempt to derail our preparation for bypolls. I strongly condemn this.”

Hitting out at the Congress, Medical Education Minister K. Sudhakar tweeted that the two bypolls – in Rajarajeshhwari Nagar and Sira – are not crucial in terms of numbers. The BJP has just too many MLAs in the 225-member assembly to be in any danger.

But the Congress and JD-S would not like to lose these seats that they had held, while the ruling party would not want a defeat either.

Newly appointed BJP national General Secretary C.T. Ravi tweeted: “It was the corrupt @INCIndia government led by Sonia Gandhi that treated CBI as a Puppet against its opponents. Wasn’t huge unaccounted money seized by IT authorities during the raid on the house of @DKShivakumar?”

The Karnataka BJP through its Twitter handle shot back that the Congress should have known that they would have to face such an embarrassment in future when they garlanded him when he was released from Tihar jail.

“He is a corrupt politician everyone knows, but the Congress is hell bent on protecting him. Congress should be ashamed of it,” the BJP tweet read.

The bypolls will be held in Karnataka on November 3.