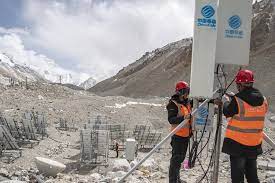 BEIJING: China has opened a 5G signal base at the Ganbala radar station in the remote Himalayan region of Tibet which is the world’s highest manually operated radar station at an elevation of 5,374 meters, the Chinese military’s official website reported on Monday.

The mountain is located in Nagarze County in Tibet which is in the vicinity of borders with India and Bhutan.

At the end of last year, the People’s Liberation Army started to coordinate with civilian enterprises to launch 5G base station construction in Ganbala to solve the difficulty of network access for the border defence troops, the website said.

The stable and high-speed 5G signal enables the soldiers in the deep mountains to keep up with the information society, leaving the monotonous and boring life on the border, it said.

It is part of efforts to improve training and on-duty conditions for soldiers stationed in border areas, it added.