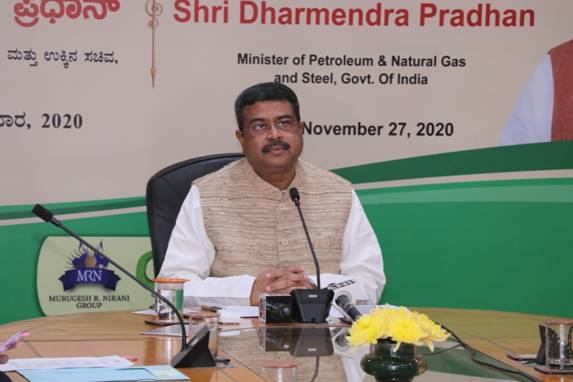 This plant will utilize 200 TPD of press mud and will be commissioned at the estimated cost of about 42 crores.

This will generate about 10.2 TPD of CBG and also bio-manure. Praj Industries and DVO Inc. have provided the technology for the proposed plant.

Speaking on the occasion, Pradhan said that the Government is working to provide cleaner and sustainable energy. India is not a polluting country, but still Prime Minister (PM) Narendra Modi as a responsible global leader has underlined India’s commitment to sustainability and climate change mitigation. How can we achieve cleaner path in each activity, is what we are striving for.

Pradhan said that the SATAT was launched in 2018 as part of the Prime Minister’s vision to reduce dependence on fossil fuels and have an alternative source of clean fuel for transport. Over the last two years, it has grown into one of flagship programs of MoPNG. SATAT will establish an ecosystem for the production of Compressed Bio Gas (CBG) from various waste and biomass sources in the country leading to multiple benefits. Using agricultural and municipal wastes to produce gas under SATAT will reduce carbon emission and also fulfil Government’s commitment in COP-21. It is also in line with the Swachh Bharat Mission of the Government.

He exhorted the young entrepreneurs to invest in the initiative for creating a vibrant bio-gas system.

The Minister said that CBG plants provide win-win situation for all the stakeholders.“Various supports offered to CBG plants like floor price guarantee of CBG produced for 10 years, inclusion of CBG in priority sector lending by the RBI, subsidy scheme and support by various state government w.r.t allotment of land etc. have set the congenial ecosystem. It is now the turn of entrepreneurs and corporates to invest in the initiative for greater socio-economic returns”, he added.

Talking about the efforts being to move towards ‘gas based economy’ in India, the Minister said that last week, the Ministry has signed MoUs with leading private sector energy companies for establishing about 900 CBG plants and also with technology partners for facilitating technological support for the projects. With more number of private sector participation, the mission of achieving indigenous and sustainable production of clean fuel would be a game changer.

The Minister informed that a MoU was signed between North Delhi Municipal Corporation with IOCL yesterday for waste to energy plant at Ranikhera in Delhi, which will help generate CBG from 2500 MT of MSW every day and also reduce pollution to a great level. 600 Letter of intents have already been issued for the CBG plants. He said that the entire society will appreciate these initiatives, for garbage disposal, solid waste management and Waste to wealth conversion.

The Minister said that by augmenting the domestic gas availability to domestic and industrial sectors, this initiative shall promote AatmaNirbhar Bharat Abhiyaan of the Government and make us self-reliant, reduce import bills of crude and also boost employment. He called for encouraging support to Start-ups, especially in the field of biomass aggregation/ supply chain, to establish an innovative but stable supply chain ecosystem in coordination with the farmers and State Governments. He said that PESO, the organization looking after the safety aspects, has been working hard for expediting approvals for the gas sector.

Speaking to the farmers at the event, he said that the projects under SATAT are also meant to enhance the farmer’s income by making the agricultural residues remunerative. Using agricultural, municipal wastes to produce gas under SATAT will reduce carbon emission and also fulfil Government’s commitment in COP-21. It is also in line with the Swachh Bharat Mission of the Government.

The SATAT initiative intends to augment the domestic gas availability to domestic and industrial sectors, this initiative shall promote AatmaNirbhar Bharat Abhiyaan of the Government and promote self-reliance, reduce import bills of crude and also boost employment. He said that Karnataka, which is predominantly an agriculture-based state, will greatly benefit from such plants.