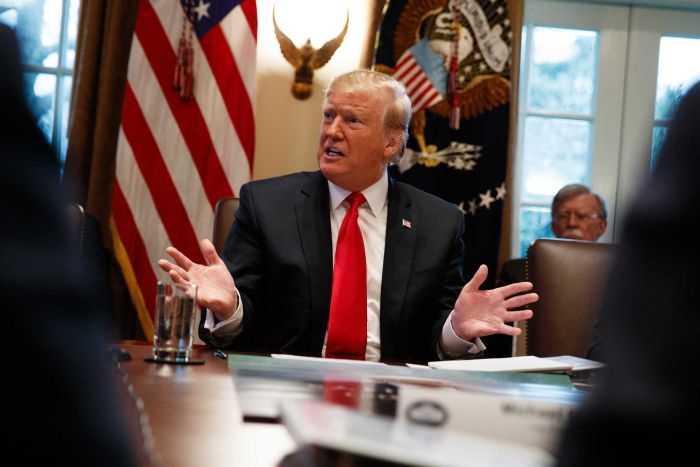 WASHINGTON: USA President Donald Trump has said he intends to end the preferential trade status granted to India and Turkey, asserting that New Delhi has failed to assure America of “equitable and reasonable” access to its markets, an announcement that could be seen as a major setback to bilateral trade ties.

President Trump notified Congress in letters of his “intent to terminate” trade benefits for both countries under the Generalized System of Preferences (GSP) eligibility criteria.

Under the United States GSP programme, nearly 2,000 products including auto components and textile materials can enter the US duty-free if the beneficiary developing countries meet the eligibility criteria established by Congress.

India was the largest beneficiary of the program in 2017 with USD 5.7 billion in imports to the US given duty-free status and Turkey the fifth largest with USD 1.7 billion in covered imports, according to a Congressional Research Service report issued in January.

In a letter to Speaker of the US House of Representatives Nancy Pelosi, Trump said he was determined that New Delhi had “not assured” the US that it would “provide equitable and reasonable access” to the markets of India.

“I am taking this step because, after intensive engagement between the United States and the Government of India, I have determined that India has not assured the United States that it will provide equitable and reasonable access to the markets of India,” Trump said in the letter to congressional leaders on Monday.

“I will continue to assess whether the Government of India is providing equitable and reasonable access to its markets, in accordance with the Generalized System of Preferences (GSP) eligibility criteria,” Trump said in his letter, a copy of which was released to the press.

Trump, who has vowed to reduce US trade deficits, has repeatedly called out India for its high tariffs.

Addressing a four-day annual Conservative Political Action Conference (CPAC) in Maryland on Saturday, Trump accused India of being a “high tariff nation” and threatened to impose “a reciprocal tax” to match the heavy duties that New Delhi imposes on goods imported from the United States.

The GSP criteria include, among others, respecting arbitral awards in favour of US citizens or corporations, combatting child labour, respecting internationally recognised worker rights, providing adequate and effective intellectual property protection and providing the US with equitable and reasonable market access.

Countries can also be graduated from the GSP programme, depending on factors related to economic development.

In a separate letter, Trump also informed the Congress of his intent to terminate the GSP beneficiary designation of Turkey.

He said it was primarily because the economy of Turkey had improved a lot in the last four-and-a-half decades.

“In the four-and-a-half decades since Turkey’s designation as a GSP beneficiary developing country, Turkey’s economy has grown and diversified,” he said.

“Increases in Gross National Income per capita, declining poverty rates and export diversification by trading partner and by sector are all evidence of Turkey’s increased level of economic development. In addition, Turkey has graduated from other developed countries’ GSP programs due to its increase in economic development or through reciprocal arrangements,” he argued.

Trump’s letter to Pelosi could be seen as a major setback to India-US bilateral relationship, in particular in the arena of trade and economy.

In a separate statement, the US Trade Representative (USTR) said India’s termination from GSP followed its failure to provide the US with assurances that it would provide equitable and reasonable access to its markets in numerous sectors.

Turkey’s termination from GSP followed a finding that it was sufficiently economically developed and should no longer benefit from preferential market access to the US market, the statement said.

“By statute, these changes may not take effect until at least 60 days after the notifications to Congress and the governments of India and Turkey, and will be enacted by a Presidential Proclamation,” the USTR said.

The Trump administration had launched an eligibility review of India’s compliance with the GSP market access criterion in April 2018.

“India has implemented a wide array of trade barriers that create serious negative effects on United States commerce. Despite intensive engagement, India has failed to take the necessary steps to meet the GSP criterion,” the USTR said.

The US had designated Turkey as a GSP beneficiary developing country in 1975.

An increase in the Gross National Income (GNI) per capita, declining poverty rates and export diversification by trading partner and by sector were evidence of Turkey’s higher level of economic development, the USTR said.

The US India Business Council urged the Trump administration to continue GSP benefits for India.

Despite a number of serious bilateral trade issues, both India and the US have gained from trade under the GSP program, it said.

USIBC is in the process of collecting more information from both governments on next steps, including any possible reactions by India, the council said in a late night policy alert.