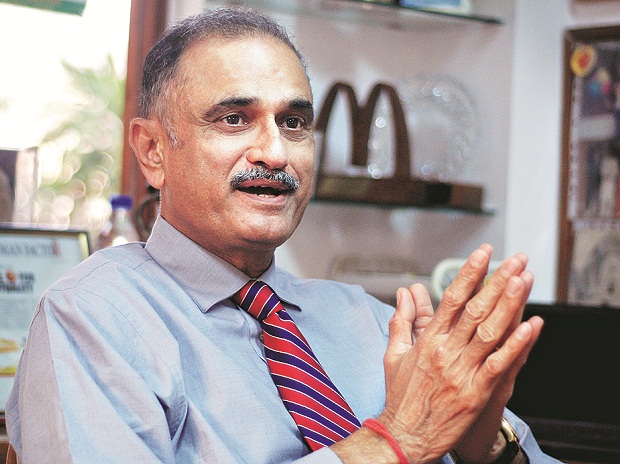 NEW DELHI: McDonald’s India and its estranged partner Vikram Bakshi have been directed by the Debt Recovery Tribunal (DRT) to appear before it and deposit the proceeds of the proposed settlement with respect to their joint venture firm Connaught Plaza Restaurants Pvt Ltd (CPRL).

Allowing an application by the state-owned Housing and Urban Development Corporation (HUDCO) on May 9, the presiding officer of DRT II Delhi has directed Bakshi not to transfer his 3,100 attached share of CPRL, a Joint venture between him and McDonald’s India to operate fast food chain in northern and eastern India.

HUDCO, which is claiming a dues of Rs 194.98 crore from Bakshi and his related entities, in its petition filed before the National Company Law Appellate Tribunal (NCLAT) informed that notices regarding orders of the DRT was already served to both the partners.

“The presiding officer directed McDonald’s India and Vikram Bakshi to appear before the DRT and deposit the proceeds of the settlement with the DRT II, Delhi.

“Furthermore, Vikram Bakshi was directed not to transfer the attached shares (of CPRL) and also to file the details of the rates of the shares as on date,” said HUDCO.

The DRT had also issued attachment notice with respect to the bank accounts of Ascot Hotels & Resorts.

“It is clear that respondent Vikram Bakshi can not alienate or transfer his shares in CPRL in view of the specific directions of the DRT vide order February 2, 2016, where Vikram Bakshi was restrained from transferring or alienating or creating any third party interest in respect of the said shares,” the corporation said.

However, it is not clear whether Bakshi and representatives of McDonald’s India have appeared before the DRT yet.

Bakshi had given guarantee to HUDCO against a loan of Rs 62.38 crore to Ascot Hotels and Resorts for a commercial project in Noida, UP in 2006, which was defaulted and declared as NPA in August 2011. To recover it, HUDCO then had moved the DRT in 2013 and requested to attach 3,100 shares (having a value of Rs 1,000 each) in CPRL, which were in the name of Bakshi.

“The respondent Vikram Bakshi had given his affidavit and undertaking that the shares held by him in CPRL will not be alienated or transferred,” said HUDCO while annexing copy of Bakshi’s affidavit in its petition filed before the NCLAT.

Passing the judgement, the DRT had on August 12, 2015 issued recovery certificate in favour of HUDCO to recover the sum along with 14 per cent interest from Ascot Hotels, Vikram Bakshi, Madhurima Bakshi and Vikram Bakshi & Co Ltd.

Thereafter, respondent, including Bakshi, was asked to disclose their details of movable and immovable assets. However, on their repeated failure to do so, HUDCO moved the DRT again for attachment of their bank account and 3,100 shares held by Bakshi in CPRL.

On this, DRT had on February 2, 2016 issued “interim directions restraining Vikram Bakshi from alienating or transferring or creating any third party interest in the 3,100 shares of CPRL or any other quantity in the name of Vikram Bakshi till further orders.”

Last week, when HUDCO came to know about the settlement between Bakshi and McDoanld’s, it moved an intervention application before the NCLAT, where both have filed petition against each other.

“The settlement so arrived at between the appellant (McDonald’s India) and respondent (Bakshi) with regards to transfer of shares to the appellant without settling the dues of the applicant/intervenor (HUDCO) will cause grave and irreparable losses to the public exchequer,” said HUCO, adding that it can not proceed without its approval.

HUDCO in its petition has requested the appellate tribunal to direct Bakshi “to furnish complete particulars and documents relating to the settlement” and to “deposit the entire proceeds of settlement” before the DRT for discharge of liability towards it.

Earlier on May 6, estranged partners McDonald’s and Bakshi had informed the NCLAT that they were working towards an out-of-court settlement to end their dispute.

On May 9, they announced an out-of-court settlement with the US fast food chain agreeing to buy Bakshi’s stake from their joint venture that operated outlets of the chain in north and east India.

The details of the pact, including financial terms, were not disclosed.

During the last hearing on May 15, 2019, the NCLAT had suggested Bakshi and his entities to settle the matter with HUDCO and has posted the matter on May 27 for next date of hearing.

Meanwhile, a two-member NCLAT bench headed by Chairperson Justice S J Mukhopadhaya also said: “The pendency of the appeal will not come in the way of Vikram Bakshi & Others to negotiate and settle the matter with HUDCO”.