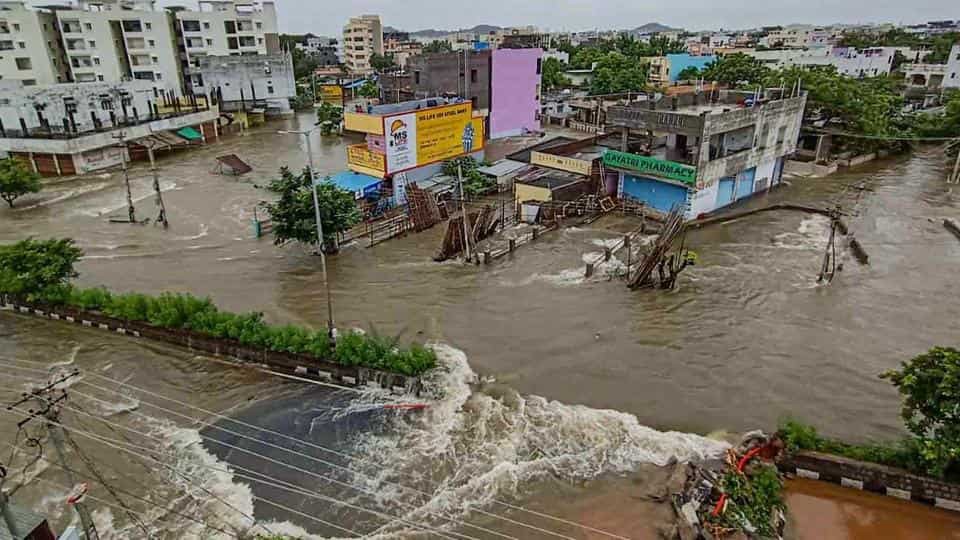 The services include forecasts, warnings and detection for various natural disasters like tropical cyclones, storm surge, floods, heatwaves, thunderstorm and lightning and earthquakes etc. MoES is also mandated to conduct ocean survey and exploration for living and non-living resources and explore all the three poles (Arctic, Antarctic and Himalayas).

The services provided by MoES are effectively used by various agencies and state governments for saving human lives and minimising damages due to natural disasters.

The significant milestones accomplished in 2020, under the five major schemes are highlighted below:

Atmospheric and Climate Research-Modelling Observing Systems and Services (ACROSS)

Accurate and timely prediction of the tropical cyclones Amphan, Nisarga and Nivar by the India Meteorological Department (IMD), combined with fieldwork by disaster management agencies, has helped save thousands of precious lives. The track and intensity forecasts of tropical cyclones have improved considerably in the past few years. Errors in the 24-hour forecast in track prediction and the landfall have reduced from 141 km to 73 km, and from 99 km to 18 km, respectively between 2006 and 2020.

Meteorological observatory of Lehwas upgraded to a full-fledged Meteorological Centre. It was inaugurated by the Minister of Earth Sciences on December 29, 2020.

The phase six of Winter Fog Experiment (WIFEX) is being conducted at IGI Airport, New Delhi and Hissarfrom November 2020 to March 2021.

Established 102 new District Agro-Meteorological Field Units in 2020. This is in addition to 130 Agromet Field Units. Experimental block-level Agromet Advisory bulletins were initiated for ~1200 blocks on each Tuesday and Friday in regional languages.

Launched the mobile application ‘Mausam’ on July 27, 2020, by the Hon’ble Minister of Earth Sciences.
Worked towards establishing an Atmospheric Research Test Bed (ART): MoES acquired ~100 acres of land from Madhya Pradesh State Government for establishing an ART at Silkheda village in Sehore District of Madhya Pradesh. The ART programme is a highly focused observational and analytical research effort that will compare observations with model calculations in the interest of accelerating improvements in both observational methodology and monsoon prediction models.

Developed a method for probabilistic forecasting of the disease incidences in extended range time scale (2–3 weeks in advance) over India. It is based on an unsupervised pattern recognition technique that uses meteorological parameters as inputs that can be applied to any geographical location over India. Based on this system, operational forecasts will be prepared from 2021 monsoon season.

Published a new open access book on Assessment of Climate Change over the Indian Regionin June 2020. This is the first climate change report for the Indian region from MoES. It discusses the influence of human-induced global climate change over the Indian subcontinent, the adjoining Indian Ocean, the Himalayas on the regional monsoon.
Established MMDRPS (multi-mission meteorological data receiving and processing system) for INSAT-3D, INSAT-3DR and INSAT-3DS satellites through an MoU with M/s Antrix Corporation, Indian Space Research Organisation (ISRO). Dedicated New Earth stations have been setup under MMDRPS Project, which has the capability to receive the data from INSAT-3D, INSAT-3DR and upcoming INSAT-3DS satellites. IMD has hosted Real-Time Analysis Product and Information Dissemination (RAPID) for visualisation and analysis tool for satellite data on a real-time basis.

Upgraded global and regional data assimilation (DA) system to incorporate scientific and technological advancements. The new DA system has the capability to assimilate some of the cloud-affected satellite microwave observations. Two high-resolution reanalysis data sets were generated by NCMRWF. The first dataset is regional for 40 years (1979-2018) over the Indian region at 12 km horizontal resolution made using NCUM model. The second dataset is global for 20 years (1999-2018) at 25 km resolution using NGFS system.

Disseminated advisories of Potential Fishing Zone continuously from January to November 2020. The advisories were issued in smart-map and multilingual text severy day, subject to availability of satellite data, fishing-ban, and adverse sea-state.

Achieved certificate of recognition and certificate of appreciation for ’tsunami ready’ by the Intergovernmental Oceanographic Commission (IOC)-UNESCO. It was conferred to Venkatraipur and Noliasahi village communities in Odisha, and to the officials of the Odisha State Disaster Management Authority (OSDMA) through a virtual event on August 07, 2020. The certification is a first-of-its-kind in the Indian Ocean region.

Launched Digital Ocean, an innovative web-application project to manage ocean data. It was inaugurated by Minister for Earth Sciences on December 29, 2020. It provides a dynamic framework to efficiently integrate and manage heterogeneous ocean data along with advanced visualisation (including 3D and 4D animations) and analysis tools.

Prepared a coastal water quality index map for Andhra Pradesh coast based on data from cruise conducted in August 2020.

Developed an integrated flood warning system for Mumbai (iFLOWS-Mumbai) in collaboration with the Disaster Management Department, Municipal Corporation of Greater Mumbai (MCGM). It was launched on June 12, 2020, by Minister for Earth Sciences and Chief Minister of Maharashtra.

Moored six deep-sea buoys to provide open ocean data to be disseminated in real-time to Indian National Center for Ocean Information Services (INCOIS), Hyderabad and IMD to be used for tsunami early warning.

Developed experimental scale mass culture of marine Spirulina in 2-tonne raceway with F/2 for production of lutein from marine microalgae. Lutein is pharmaceutically important.The technology was transferred to M/s Vectrogen Biologicals Private Limited, Hyderabad through National Research and Development Corporation (NRDC).
Completed the indigenisation of drifting buoy with Indian National Satellite System (INSAT)communication. The technology licensing agreement has been signed with two Indian industries under the NRDC for commercialisation.

Completed all scientific projects and logistics operations of the 39th Indian Antarctic expedition. Stations were resupplied for food and provisions, fuel, spares, etc., after which the expedition vessel MV Vasiliy Golovnin sailed for return on March 26, 2020.

Organised the 3rdmeeting of the BRICS working group on the ocean and polar science and technology online on September 23, 2020. About 50 delegates from Brazil, Russia, India, China, and South Africa (BRICS) joined the meeting, and 21 scientific presentations were made. Participants deliberated upon the research programs and future activities of each BRICS country in the ocean and polar sciences,bilateral and multilateral cooperation initiatives between BRICS countries, a roadmap for the working group, priority research areas and topics for the next BRICS-(Science, Technology and Innovation) STI call, BRICS joint cruises, mutual cooperation and capacity building plans, action areas, and involvement in the United Nation’s Decade of Ocean Sciences for Sustainable Development.

Located 1,527 earthquakes in and around India from January to November 2020, of which 65 events were of magnitude ≥5.0, 277 events were micro, and remaining events were small. The seismic microzonation work of four cities, namely, Bhubaneswar, Chennai, Coimbatore, and Mangalore, started in 2018 and is now in an advanced completion stage.

Participated in the Integrated Ocean Drilling Program(IODP)-378 expedition in the far southern Pacific Ocean from January 03 to February 06, 2020. The expedition aimed to investigate the record of Cenozoic climate and oceanography through a drilling transect.

Established Isotope Geochemistry Facility (IGF) at the National Centre for Earth System Science (NCESS), Kerala. It can host a 213-nanometer neodymium-doped yttrium aluminium garnet (Nd-YAG) laser ablation micro probe which can be coupled with a quadrupole inductively coupled plasma mass spectrometry (ICP-MS) and a multi-collector ICP-MS. It can help study the internal structure of various accessory minerals such as zircon, monazite, rutile etc. by usinghigh-resolution imaging techniques such as scanning electron microscope and electron probe micro-analyser. This powerful combination of methods is now routinely applied in NCESS-IGF to resolve several intriguing geological questions about the Indian shield. It will also help understand Precambrian terranes’ deep-time evolution, such as the southern granulite terrain in South India.

REACHOUT
Rolled out special proposals in earth science applications: MoES announced a special call for research proposals under the artificial intelligence/machine learning applications in Earth sciences. Nearly 200 submissions were received and are currently under assessment.

Training to enhance the skilled global workforce in Earth sciences: The ITCOOcean (International Training Centre for Operational Oceanography) continued its operations and was recognised as a regional training centre under the UNESCO-Ocean Teacher Global Academy 2 for three years (2020 – 2023). It conducted three training programs with 1,731 participants between January and November 2020, of which 1,150 are Indian nationals, and 581 were international participants from 73 countries of the world. The gender ratio of participants of training programs was encouraging with a male:female ratio of 987: 744.

Science communication, dissemination and engagement: MoES successfully conducted a series of webinars of live talks entitled ‘Earth Sciences Popular Lectures” from May 2020.About 38 live talks on a variety of topics were delivered and are made available on YouTube.

Fifty-Fold gains to the agricultural workforce of India: MoES engaged the National Centre for Applied Economic Research (NCAER), Delhi, to study the economic benefits of the Monsoon Mission (MM) and High-Performance Computing Facilities (HPC)by estimating the income gain to Indian farmers, livestock owners and fisher folk by adopting weather and ocean state forecasts provided by MoES. The report highlighted that India’s investment of nearly 1,000 crores in the Monsoon Mission (MM) and High Performance Computing (HPC) programs would yield benefits worth rupees 50 thousand crores to ~10.7 million below poverty line (BPL) agricultural households and 0.53 million BPL fisher folk households in the country in 5 years. Moreover, the report highlighted that ~26.6 per cent of the economic gains are attributed to women workforce of the country.

Launched the Knowledge Resources Centre Network (KRCNet): It is a unique initiative of the MoES. It was inaugurated by Minister for Earth Sciences, Dr Harsh Vardhan, on July 27, 2020. It aims to integrate all knowledge and intellectual resources of MoES and its institutes on a single, dynamic, web portal. Under the Digital India Initiative of the Government of India, the portal is a one-of-its-kind digital system to collect, collate, catalogue, store and retrieve the knowledge products of MoES and its institutes 24X7 from around the globe.

The MoES collaborated with several scientific international institutes to broaden the research scope in all fields of earth sciences through trans-national joint projects and developmental work. Some of the important international collaborations are highlighted below:

Signed a Memorandum of Understanding (MoU) with the National Ocean and Atmospheric Administration (NOAA), USA on Earth sciences and observations. It entered force in 2010 after the exchange of a diplomatic note. The agreement valid was for ten years; and has been renewed on October 23, 2020, through a virtual event. The Indian ambassador to the United States, Taranjeet Singh Sandhu signed the MoU on behalf of MoES.

Signed an MoU with the United States Geological Survey (USGS) on November 01, 2018, towards collaborative research in seismology. A pilot project to develop an Earthquake Early Warning System for India is under consideration. Towards this goal, a virtual meeting was organised on September 01, 2020, which had representation from the USGS, US Embassy in Delhi, Director of the National Center for Seismology (NCS), New Delhi, and senior scientists of MoES.

Completed three projects jointly funded by the MoES and Natural Environment Research Council (NERC), UK. The projects are under the Sustaining Water Resources (SWR) programme for food, energy and ecosystem services in India.

Hosted the Secretary-General, BIMSTEC (Bay of Bengal Initiative for Multi-Sectoral Technical and Economic Cooperation) at the BIMSTEC Centre for Weather and Climate (BCWC) by the NCMRWF on February 13, 2020. The first meeting of the BIMSTEC-Intergovernmental expert group on disaster management was organised by the National Disaster Management Authority (NDMA) during February 14, 2020, at Puri, Odisha.

Signed an MoU with the National Centre of Meteorology, Ministry of Presidential Affairs, UAE for scientific and technical cooperation on November 23, 2020.