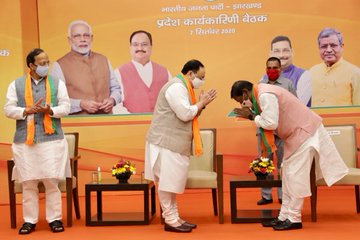 RANCHI: BJP president J P Nadda launched a blistering attack on the Hemant Soren government in Jharkhand on Monday, alleging it was “steeped in corruption”.

Addressing the state BJP executive committee meeting digitally from New Delhi, he said the previous BJP government led by Raghubar Das had “almost eliminated” naxlism, which has been resurrected under the Soren dispensation.

He said the BJP lost the assembly elections in the mineral-rich state due to “political arithmetic” despite garnering the highest number of votes.

“The Hemant Soren government is steeped in corruption.

No development is taking place under its watch. Corruption, naxalism and crime are flourishing unbridled. This reflects the politics of appeasement,” he alleged.

He said Prime Minister Narendra Modi ushed in positive changes in the country as a result of which the “lotus” (BJP’s election symbol) found its place in the hearts of the people.

Nadda lauded his party and the Modi government for tackling COVID-19.

“Only the BJP showed dynamism when opposition parties stood stock-still during COVID-19 outbreak,” he asserted.