India to be third biggest economy by 2024: Amit Shah 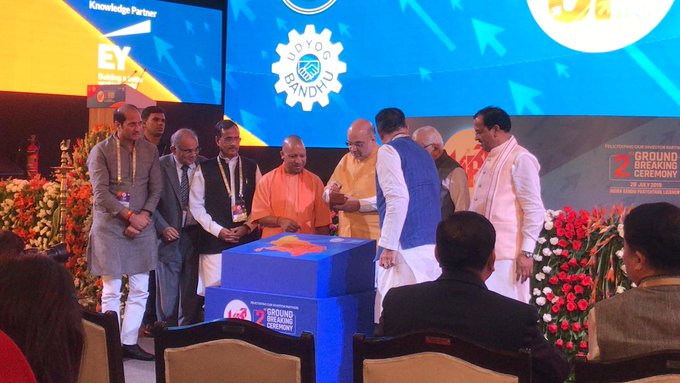 India to be third biggest economy by 2024: Amit Shah

NEW DELHI: India’s Home Minister Amit Shah on Sunday said that in the next five years, India would be the third biggest economy in the world.

Shah was speaking at the second ground breaking ceremony in Lucknow which saw the launch of more than 250 projects worth Rs 65,000 crore.

He said that in the past five years, Prime Minister Narendra Modi had taken the country’s economy to the fifth position from the 11th position.

The Home Minister added that Uttar Pradesh Chief Minister Yogi Adityanath had translated dreams into reality in a short period and congratulated him for improving the atmosphere in the state, including the law and order situation. He also said that Uttar Pradesh was all set to play a major role in the country’s economy.

Adityanath said that he had made concerted efforts to establish connect with capitalists and industrialists. He said that the investment of Rs 65,000 crore would create three lakh jobs in the state.

Uttar Pradesh Industrial Development Minister, Satish Mahana, said: “The first ground breaking ceremony last year was highly successful and this time more than 250 projects worth around Rs 65,000 crore are being announced. Out of the projects that were announced in the first ceremony, only two projects could not be started due to policy related issues. Other projects have materialised.”

Yusuffali MA, Chairman and Managing Director of the Lulu Group, said: “We have 174 shopping malls across the country. It was decided by us to open a mall in northern India and we have chosen to invest in Lucknow. When I met Yogi Adityanath with the proposal, he decided to provide us every possible help. This is how an investor gets confidence. Many industrialists are participating in the second ground breaking ceremony and are ready to invest because of support from the state government.”

Eminent cardiologist Naresh Trehan told reporters, “We have planned to lay the foundation stone for a 700-bed hospital in Noida. In future we will also build institutions like Medanta in Varanasi and Gorakhpur which are in eastern part of the state. The ground breaking ceremony has created a healthy environment for investment and is undoubtedly going to be a huge success.”

PepsiCo India, on Sunday, said it plans to invest Rs 514 crore over the next three years to set up a greenfield snacks manufacturing plant in Uttar Pradesh.

The new investment plan is in line with PepsiCo’s goal to double its snacks business in the country by 2022 and it is expected to help create over 1,500 jobs, both direct and indirect.

PepsiCo India President and CEO Ahmed ElSheikh said: “PepsiCo is committed to growing its food and beverage business sustainably in India. We have a long relationship with the people of Uttar Pradesh. As we look to double our snacks business over the next few years, we intend to invest Rs 514 crore approximately to expand our footprint in Uttar Pradesh.”