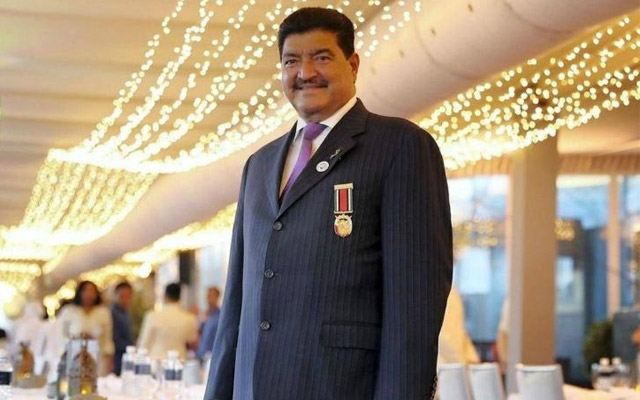 BENGALURU: Indian-origin UAE businessman B.R. Shetty who made a surprise attempt to return to the UAE after eight months in India, has been stopped by immigration officials at the Bengaluru airport as he was about to board an Etihad flight, Khaleej Times has reported.

Shetty and his business empire have been embroiled in alleged financial irregularities and fraud involving billions of dollars, the report said.

Shetty’s attempt to fly to Abu Dhabi by Etihad Flight EY217 on Saturday morning, for what he described as his eventual “return to the UAE as promised”, was halted just minutes after he spoke to Khaleej Times from the airport declaring his “complete faith in the justice system of the UAE”.

Shetty, who spoke to Khaleej Times even after he was stopped by the immigration officials, said his wife Chandrakumari Shetty, who was to accompany him, was allowed to board the flight which was scheduled to depart at 2.45 a.m. on Saturday and arrive at 5.40 a.m. in Abu Dhabi, the report said.

An Indian court has already restricted Shetty and his wife from selling or encumbering properties that Bank of Baroda claimed are personally guaranteed as security by the businessman.

The billionaire entrepreneur, who has been away from Abu Dhabi since February, said on Saturday evening that he was trying to get the travel curbs removed and is hopeful of returning to Abu Dhabi within days “to support the UAE authorities and all relevant bodies to correct any injustice done to the companies, their employees, shareholders and other stakeholders and help find solutions to outstanding matters”.

A few weeks ago, Shetty had sought an investigation by Indian federal agencies into a series of frauds allegedly committed by former top executives of his companies, as per the report.