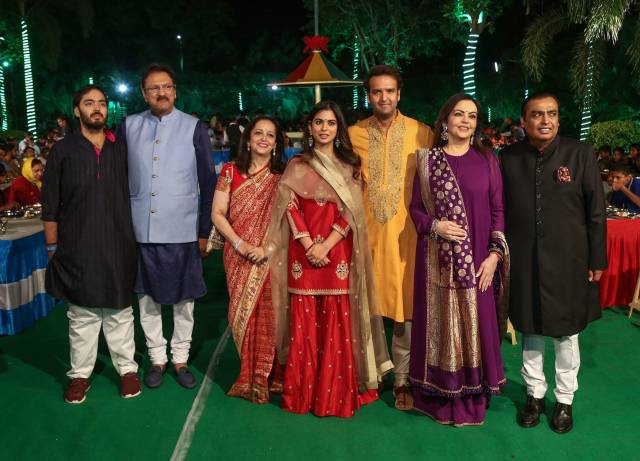 NEW DELHI: India is preparing for what could be one of the world’s most expensive weddings ever, a spectacle that could even put the fictional nuptials in “ Crazy Rich Asians” to shame.

On Dec. 12, Asia’s richest man — oil-and-telecom tycoon Mukesh Ambani — is scheduled to give away his daughter Isha to billionaire Ajay Piramal’s son, Anand. The week-long extravaganza is estimated to cost about $100 million, according to people familiar with the planning. To put the figure in perspective, Prince Charles and Princess Diana’s wedding 37 years ago reportedly cost $110 million in today’s dollars.

Invitees to the pre-wedding festivities, in the central Indian lake city of Udaipur, range from international celebrities such as Beyonce to politicians like Hillary Clinton and business tycoons including Henry Kravis, according to people familiar with the matter. The guest list is so long that the Ambanis and Piramals have taken over at least five five-star hotels nearby, and a war room has been set up in Mumbai to manage logistics, they said. According to local media reports, more than 100 chartered flights will fly guests to and from Udaipur’s Maharana Pratap Airport.

As gratitude to the city of Udaipur, the Ambanis donated enough food to feed 5,100 people three meals a day for four days, and set up a bazaar to showcase 108 traditional Indian paintings, pottery and other art from local artisans, according to a statement from a family representative.

The main ceremony will be held at the patriarch’s home, the 27-story Antilia palace in Mumbai, and post-wedding events will be held in the city.

For the chairman of Reliance Industries Ltd., who overtook Jack Ma this year as Asia’s wealthiest man, Isha will be the first of his children to wed. After the festivities, the newlyweds are poised to move in to their $64-million diamond-themed mansion at the Gulita building in Mumbai, according to one of the people.

A Reliance representative didn’t respond to an emailed query, while a spokesperson for Piramal Enterprises Ltd. declined to comment.