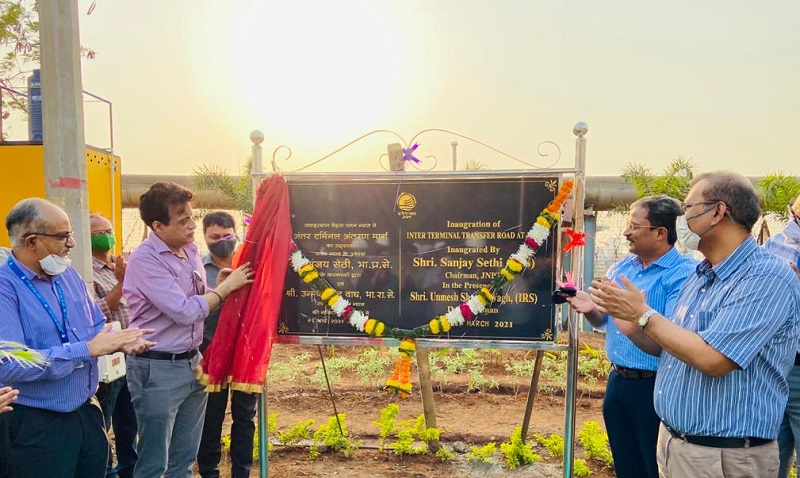 NEW DELHI: In a major push and with a vision to achieve seamless trade, new Inter Terminal Route connecting BMCT Terminal with all the other four Container Terminals of JNPT was inaugurated at Jawaharlal Nehru Port Trust (JNPT), India’s premier container port today.

The newly inaugurated route will reduce the container movement distance between BMCT and the other JN Port Terminals from the existing 5 kms to 2.5 kms in one direction. This route will be used exclusively for the movement of TP (Transhipment) & ITRHO (Inter Terminal Rail Handling Operation) containers between BMCT and other terminals of JN Port offering a smooth and continuous flow of ITRHO and TP containers.

Speaking at the inauguration ceremony, Shri Sanjay Sethi, IAS, Chairman, JNPT said, “The inauguration of Internal Terminal Route will help in smoothening the overall trade cycle and further enhance our efficiency. It will further streamline the movement of rail containers between BMCT with all the other four Container Terminals at the port. JNPT has also taken various other initiatives under ‘Ease of Doing Business’ that has helped save significant amount of time and cost for the EXIM community.”

Trade will be benefitted, as the new route would ensure timely connection of export containers arriving by trains in mixed condition to the particular vessel in any of the terminals and also enhance the train handling time at JN Port.

Overall the new route is expected to increase the rail share and volume of Transhipment containers in JN Port. This is a yet another significant move by JNPT to provide ease of doing business to the EXIM community, in its endeavour to be among the best container port globally.