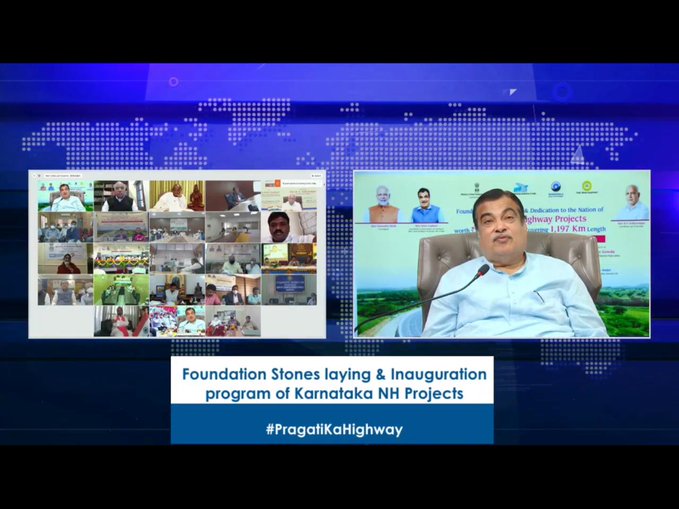 The highways and roads are the arteries and veins of the heart of #NewIndia. The scale and speed at which PM @narendramodi government is building infrastructure is unprecedented and transformational. (1/2)#PragatiKaHighway @PMOIndia @nitin_gadkari pic.twitter.com/z5IuVcws8O

The Road Transport and Highways Minister was addressing a virtual event after laying foundation stone and inaugurating projects worth Rs 11,000 crore in Karnataka.

The 33 projects pertain to building 1,200 kilometres of highway stretches in the state.

“The Union Government shall invest approximately an amount of Rs 1,16,144 crore in Karnataka state in the coming years,” a statement from the Ministry of Road Transport and Highways said quoting the minister.

Gadkari said over 900 km NH length has been added in Karnataka during last six years, and it now stands at 7,652 km.

The minister added that for providing smooth connectivity to the ports for the benefit of trade and economy, 4-laning of the entire coastal road from Goa Border to Kerala Border connecting port city of Belekeri, Karwar and Mangalore covering a length of 278 km has been taken up at a cost of Rs 3,443 crore and the work has been substantially completed.

Further, in view of the safety of road users, 3 works of providing protective measures on hill slopes in Shiradi Ghat on NH-75, Charmadi Ghat on NH-73 and Sampaje Ghat on NH-275 have been sanctioned amounting to Rs 115 crore.

The minister said that CRF (central road fund) works worth Rs 8,330 crore have been sanctioned till now for the state. Annual accrual during this year is Rs 435 crore, while total release is Rs 217 crore. Gadkari declared release of this year’s remaining Rs 218 crore under CRF.

Gadkari called upon the state to take up production of ethanol in a big way, as it is one of the largest producers of sugarcane in the country.

He said, the country is already over-producing sugar and rice, and sufficient stocks are available with the government.

The surplus may be converted to ethanol, which can be used as an alternative fuel for vehicles, he said and added this will not only improve farmers’ income, but will also be an indigenous source of fuels for the country.