Mukesh Ambani sold dreams to tech giants for $27 billion, Now he has to deliver 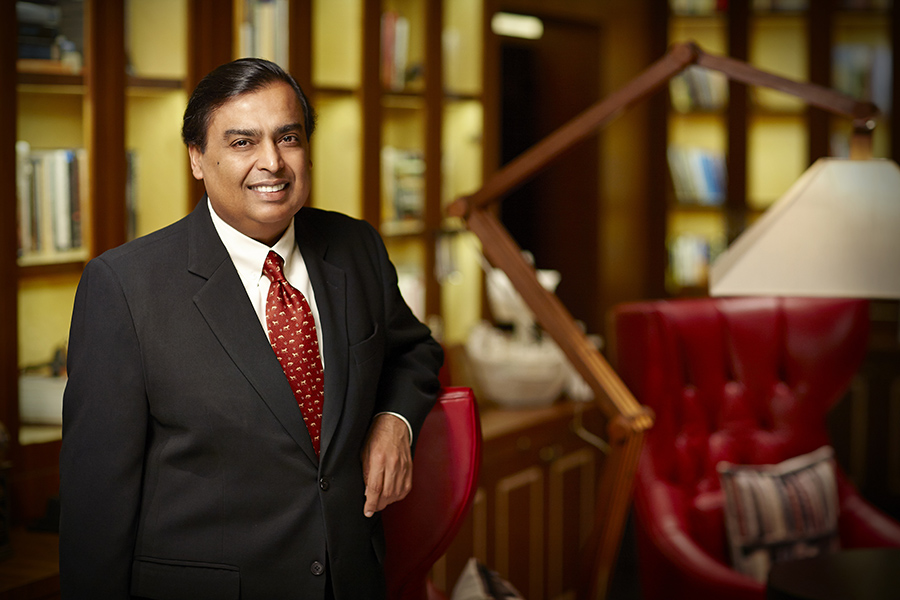 Mukesh Ambani sold dreams to tech giants for $27 billion, Now he has to deliver

NEW DELHI: Mukesh Ambani spent much of 2020 convincing Facebook Inc., Google and a clutch of Wall Street heavyweights to buy into his vision for one of the world’s most ambitious corporate transformations.

Now flush with $27 billion in fresh capital, Asia’s richest man is under pressure to deliver.

The 63-year-old Indian tycoon is focused on a handful of priorities as he tries to turn Reliance Industries Ltd. from an old-economy conglomerate into a technology and e-commerce titan, according to recent public statements and people familiar with the company’s plans.

These include developing products for the anticipated roll-out next year of a local 5G network; incorporating Facebook’s WhatsApp payments service into Reliance’s digital platform; and integrating the company’s e-commerce offerings with a network of physical mom-and-pop shops across the country. Ambani is also pushing forward with plans to sell a stake in Reliance’s oil and petrochemical units, a deal he had originally hoped would reduce debt and finance his high-tech pivot earlier this year.

Investors are watching Ambani’s every move as he overhauls his empire — with a market value of $179 billion — in the middle of a pandemic, wading into highly competitive industries and taking on rivals from Amazon.com Inc. to Walmart Inc. Reliance shares rose as much as 55% this year to an all-time high in September, but they’ve since pared gains as stakeholders look for more evidence that Ambani can execute.

Nandan Nilekani, co-founder and chairman of Infosys Ltd., poses for a photograph in Bengaluru, India, on Wednesday, Oct. 24, 2019. Infosys, the Indian software maker that’s battling whistle-blower allegations about its finances, sought to assure investors on Nov. 6 that the accusations have had little impact on the company’s ability to win contracts.

“The jury is out,” said Nandan Nilekani, who co-founded Infosys Ltd. in 1981 and now serves as chairman of the Bangalore-based software services provider valued at about $72 billion. “There’s a lot of work to be done.”

spokesman for Mumbai-based Reliance Industries declined to comment for this story.

While Ambani has publicly embraced his new partnerships with investors including Facebook (he and Mark Zuckerberg traded compliments during a livestreamed conversation on Dec. 15), the Indian tycoon’s fundraising spree was initially meant to be more of a Plan B. His original goal was to sell a 20% stake in Reliance’s oil and petrochemicals division to Saudi Arabian Oil Co., at an enterprise value of $75 billion, implying a $15 billion valuation for the stake.

The Aramco deal, first announced in August 2019, was supposed to help Ambani deliver on a pledge to get rid of his company’s $22 billion in net debt in 18 months. But as talks with the Saudis stalled, Reliance investors grew more anxious. The stock tumbled more than 40% in the three months through March 23.

Ambani, who had begun exploring stake sales in his digital services and retail units months earlier, decided to accelerate those talks after the Aramco deal hit a wall, people familiar with the matter said.

The response from investors exceeded the company’s expectations, one of the people said, with big-name backers including KKR & Co., Silver Lake and Mubadala Investment Co. committing more than $20 billion to the digital business and $6.4 billion to retail. Reliance declared itself free of net debt in June, nine months before its self-imposed deadline and Reliance’s shares surged.

At Reliance’s annual shareholder meeting in July, Ambani and his eldest children Isha and Akash sketched out the broad thrust of their high-tech ambitions. Among the new services they touted was a 5G wireless network as early as next year and a video-streaming platform that will bring Netflix, Disney+ Hotstar, Amazon Prime Video and dozens of TV channels under one umbrella.

The company’s biggest priority for 2021 is 5G, people familiar with the matter said. While regulators have yet to auction rights to India’s next-generation airwaves, Ambani said this month that his company “will pioneer the 5G revolution in India in the second half of 2021.”

Advertisements for Jio Platforms Ltd., the mobile network of Reliance Industries Ltd., are displayed at Marine Drive in Mumbai, India, on Tuesday, July 14, 2020. Google is in advanced talks to buy a $4 billion stake in Jio, the digital arm of Indian billionaire Mukesh Ambani’s conglomerate, people familiar with the matter said, seeking to join rival Facebook Inc. in chasing growth in a promising internet and e-commerce market.

Reliance is planning to showcase its lineup of 5G products at next year’s shareholder meeting, which typically takes place sometime between July and September, one of the people said. The company is also working with Google on an Android-based $54 smartphone, part of the strategy to get more Indians to use mobile data for services including streaming video, online games and shopping.

Reliance views the integration with WhatsApp’s recently approved payments system as a crucial step in the development of its online shopping services, the people said. The companies are working together as Reliance’s e-commerce platforms look to tap hundreds of millions of Facebook, WhatsApp and Instagram users.

Ambani’s biggest challenge now is to earn a return on these investments, said James Crabtree, author of “The Billionaire Raj: A Journey Through India’s New Gilded Age.”

The industries Ambani is targeting are constantly evolving, much more so than the refining and petrochemicals businesses that still comprise the bulk of Reliance’s revenue. “He’s got to get it right over and over again,” Crabtree said.

There’s also the challenge of “key man” risk. Ambani — the face of Reliance — isn’t getting any younger. While the company hasn’t publicly disclosed a succession plan, India’s Mint newspaper reported in August that Ambani, whose net worth is about $77 billion, is setting up a family council and aims to complete succession planning by the end of next year.

“Mukesh has been a big part of this wave of innovation,” said Sundar Pichai, chief executive officer of Alphabet Inc., which owns Google. “His vision and focus of a future where every Indian can benefit from the opportunities technology creates is really exciting to us and we are glad to be a partner in that work.”

Ambani has also positioned his empire as a potential asset for an Indian government that’s keen for ways to counter the growing technological might of China, especially after deadly border clashes between the long-time rivals this year. Ambani has repeatedly highlighted how Reliance’s goals align with those of Prime Minister Narendra Modi’s government, which has called for homegrown solutions to bridge the country’s yawning digital divide.

While Infosys’s Nilekani cautions that it’s too early to declare Reliance’s transformation a success, he’s optimistic that Ambani will pull it off.

“He has a terrific eye for execution,” Nilekani said. “He looks at the big picture while at the same time getting into every minor detail, much like Jeff Bezos. They are both unique. Neither man is known to give up.”