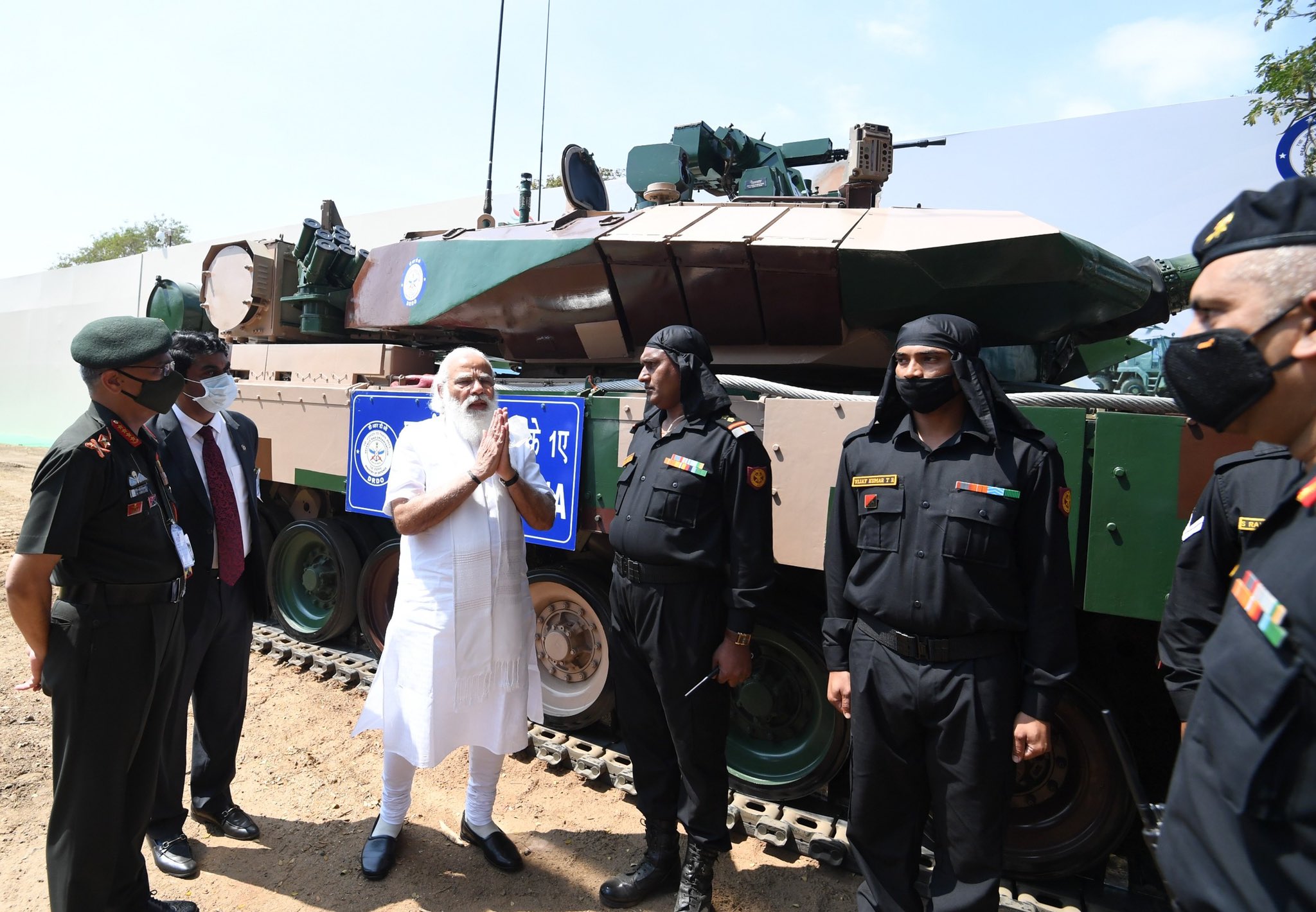 NEW DELHI: The Prime Minister Narendra Modi inaugurated and laid the foundation stones for several key projects and handed over the Arjun Main Battle Tank (MK-1A) to the Army, at Chennai today.

Speaking in the occasion, the Prime Minister said “these projects are symbols ofInnovation and Indigenous development. These projects will further the growth of Tamil Nadu.”

He said Thanjavur and Pudukkottai will be specially benefitted as the foundation to modernise the six hundred and thirty sixkilometres long Grand Anicut Canal System was laid today.The impact of this is going to be very big.It will improve irrigation facilities for 2.27 lakh acres of land.

Modi lauded the farmers of Tamil Nadu for record food grain production and good use of water resources. He said that “the Grand Anicut is a living testimony to our glorious past.It is also an inspiration to our Nation’s“Aatmnirbhar Bharat” goals.”

Quoting Tamil poet Avvaiyar, the Prime Minister stressed the need to conserve water as it is not just national issue but a global subject. He emphasized the need to remember mantra of Per Drop More Crop,

Speaking about the nine kilometre stretch of the Chennai Metro Rail Phase One, that was inaugurated today. The Prime Minister informed that the project has been completed on schedule despite the pandemic. The project is in line with the boost to Aatmnirbhar Bharat as the rolling stock has been procured locally and civil construction activities were done by Indian Contractors.

Modi mentioned that in this year’s budget, over Rupees Sixty Three thousand crore have been set aside for a hundred and nineteen kilometres of Phase two of the project.

This is one of the largest projects sanctioned for any city in one-go. The focus on urban transport will boost ‘Ease of Living’ for citizens here, Modi pointed out.

is a high traffic density route. He said there is a need to ensure faster freight movement between Chennai Port and Kamarajar Port and expressed the confidence that the fourth line between Chennai Beach and Attipattuwill help in this respect. He also noted that the electrification of Villupuram Thanjavur Thiruvarurproject will be a great boonto the delta districts.

The Prime Minister paid homage to the Pulwama attack martyrs on the anniversary of the attack today. He said “We pay homage to all the martyrs we lost in that attack.We are proud of our security forces.Their bravery will continue to inspire generations.”

The Prime Minister said India has undertaken a massive effort to become self-reliant in the defence sector. He said this is inspired by what MahakaviSubramaniya Bharathi Writing in the oldest language in the world,Tamil, said Let us make weapons; let us make paper. Let us make factories; let us make schools.Let us make vehicles that can move and fly.Let us make ships that can shake the world.

Modi said that One of the two defence corridors is in Tamil Nadu. The corridor has already received investment commitments over Rupees Eight thousand one hundred crores.

On MBT Arjun Mark 1A, the Prime Minister declared “I am proud to handover the indigenously designed and manufactured “Main Battle Tank Arjun Mark 1A”. It also uses indigenous ammunition.A tank made in Tamil Nadu will be used in our northern borders to keep the nation safe. This showcases India’s united spirit – Bharat’s Ekta Darshan”

The Prime Minister said that the focus on making India Aatmanirbhar in the defence sector will keep moving with full speed.

Our armed forces signify India’s ethos of courage.They have shown time and again that they are fully capable of protecting our Motherland. Time and again they have also shown India believes in peace.However, India will protect our sovereignty at all costs, the Prime Minister said.

The Prime Minister expressed the hope that The Discovery Campus of IIT Madras with 2-lakh square metre infrastructure to house world-class research centres.will be a leading centre of discovery and draw the best talent from all over India.

Modi said that this year’s Budget has once again showcased the reform commitment of the Government. The Budget gives special importance to the development of India’s coastal areas. Extra credit mechanisms for fishermen communities, upgradation of Infrastructure relating to fishing with modern fishing harboursin five centres including Chennai and seaweed farming. will improve lives of coastal communities.

He also informed that for seaweed cultivation, a multi-purpose sea-weed park will come up in Tamil Nadu.

Prime Minister asserted that the Government has always taken care of the welfare and aspirations of our Tamil brothers and sisters in Sri Lanka.

Modi is the only Indian Prime Minister to visit Jaffna. The resources provided by this Government for Tamils have been much more than in the past. The projects include:Fifty thousand houses for displaced Tamils in North-Eastern Sri Lanka. Four thousand houses in the plantation areas. On the health side, we financed a free ambulance service which is widely used by the Tamil community.A hospital has been built in Dickoya.To boost connectivity, the railway network to Jaffna and to Mannar is being re-built. Flights have been established from Chennai to Jaffna. India has built the Jaffna Cultural Centre which will open soon.

“The issue of Tamil rights has also been taken up by us consistently with Sri Lankan leaders. We are always committed to ensuring that they live with equality, justice peace and dignity” said the Prime Minister.