New Parliament building will witness the making of AatmaNirbhar Bharat 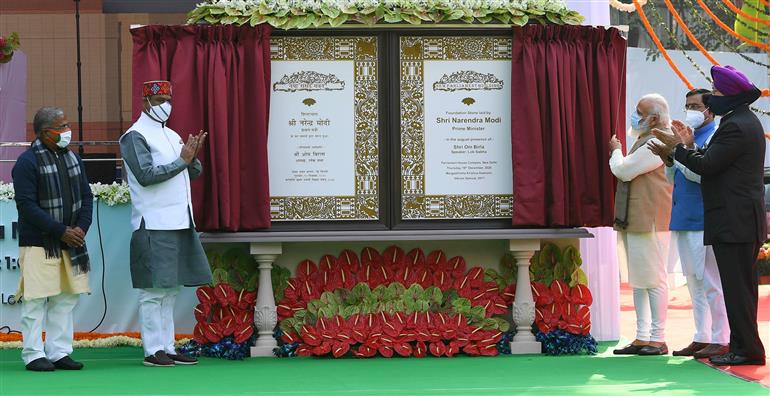 New Parliament building will witness the making of AatmaNirbhar Bharat

The new building is an intrinsic part of the vision of ‘AatmaNirbhar Bharat’ and will be a landmark opportunity to build a peoples’ Parliament for the first time after independence, one which will match the needs and aspirations of ‘New India’ in the 75th anniversary of independence in 2022.

Speaking on the occasion, the Prime Minister said today is a milestone in India’s democratic history, filled with the idea of ​​Indianness.

He added that the start of the construction of Parliament House of India is one of the most important stages of our democratic traditions. He gave a call to the people of India, to build this new building of the Parliament together.

He said it can’t be more beautiful or more pure than the new building of our Parliament witnessing when India celebrates 75 years of its independence.

The Prime Minister recalled the moment when he entered the Parliament House for the first time in 2014 as an MP.

He said that when he entered the Parliament House for the first time, he bowed his head and saluted this temple of democracy, before stepping into it. He remarked that many new things are being done in the new Parliament House that will increase the efficiency of the MPs and modernize their work culture.

The Prime Minister remarked that democracy elsewhere is about election procedures, governance and administration. But democracy in India is about life values, it is the way of life and the soul of a nation.

He added India’s democracy is a system developed through centuries of experience. There is also a life mantra, an element of life as well as a system of order in the democracy in India.

He said it is India’s democratic strength that is giving new energy to the development of the country and giving new faith to its countrymen.

He said democracy in India is constantly being renewed every year and it is seen that voter turnout is increasing with every election.

The Prime Minister remarked that democracy in India has always been a means of resolving differences along with governance. Different views, different perspectives empower a vibrant democracy.

He said our democracy has moved forward with the goal that there is always room for differences so long as it is not entirely disconnected from the process. He stressed that policies and politics may vary but we are for the service of the public and there should be no differences in this ultimate goal.

The Prime Minister urged the people to to remember that it is the responsibility of the people to awaken the optimism towards democracy which is the basis of the existence of the Parliament House. He reminded that every member who enters Parliament is accountable towards the public as well as the Constitution.

He added when each public representative will offer his knowledge, intelligence, education and experience fully here, then this new Parliament House will gain sanctity.

The Prime Minister urged the people to take the pledge to keep India First, to worship only the progress of India and the development of India, every decision should increase the strength of the country and that the country’s interest is paramount.

1. The construction of the new, triangular Parliament building is part of the central vista plan of the government. The project also includes the construction of a common central secretariat and the revamping of the 3-km-long stretch from Rashtrapati Bhavan to India Gate.

2. PM and VP’s office: Under this mega redevelopment project at Lutyen’s Delhi, the residence of the prime minister is likely to be shifted near the South Block that houses the PMO. The vice president’s new residence will be closer to the North Block.

5. Separate offices for MPs: All MPs will have separate offices in the new building. At present, Lok Sabha has a sanctioned strength of 543 members and Rajya Sabha 245.

6. Amenities: The new building will also have a grand Constitution Hall to showcase India’s democratic heritage, a lounge for members of Parliament, a library, multiple committee rooms, dining areas and ample parking space.

8. Architect of Central Vista project: Gujarat-based architecture firm HCP Designs won the consultancy bid for this ambitious project of the government. HCP Design, Planning and Management Pvt Ltd, based in Ahmedabad, is led by architect Bimal Patel and has developed several projects, including the Sabarmati Riverfront Development.

9. Construction work: A monitoring committee drawing members from the Lok Sabha Secretariat, the Ministry of Housing and Urban Affairs, the CPWD, the NDMC and the architect of the project will monitor the construction work.

10. Central Vista project cost: The Central Vista redevelopment project is expected to be completed by 2022 at an estimated cost of Rs 971 crore.

When was parliament constructed in India?

The opening ceremony of the existing Parliament was performed on January 18, 1927, by the then Governor-General of India, Lord Irwin.

The existing building is a massive circular edifice of 560 feet in diameter. The Parliament House Estate is enclosed by an ornamental red sandstone wall or iron grills with iron gates that can be closed when occasions demand. The building has twelve gates.

What will happen to existing Parliament building?

The existing Parliament building will be conserved as it is an archaeological asset of the country.

The existing building is a British era building, designed by Edwin Lutyens and Herbert Baker who were responsible for planning and construction of New Delhi.

The Foundation Stone of the existing Parliament House was laid on February 12, 1921 and the construction took six years and cost Rs 83 lakh at that time. The opening ceremony was performed on January 18, 1927 by the then Governor-General of India, Lord Irwin.

The existing Parliament House building will be suitably retro-fitted to provide more functional spaces for parliamentary events, to ensure its usage along with the new building.

The existing building is a massive circular edifice of 560 feet in diameter. The Parliament House Estate is enclosed by an ornamental red sandstone wall or iron grills with iron gates that can be closed when occasions demand. The building has twelve gates.