Paddy procurement to begin from December 1 in Chhattisgarh 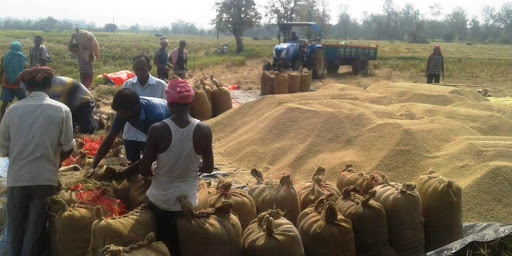 Paddy procurement to begin from December 1 in Chhattisgarh

NEW DELHI: The Chhattisgarh government will commence the paddy procurement process from December 1, Chief Minister Bhupesh Baghel has said.
In all, 21,48,606 farmers have registered themselves for paddy procurement at the minimum support price (MSP) in more than 2,000 cooperative societies in the state. A total of 19,55,236 farmers ad registered for paddy sale in 2019.

The total area under paddy cultivation by registered farmers is 27,59,404 hectares, an increase of 2.73 per cent over earlier figure.

“The state government is not slackening its paddy procurement efforts amid Covid-19 crisis. Even though the Centre has not fulfilled the state’s demand for gunny bags to store procured paddy, Chhattisgarh is still somehow trying to arrange the bags,” Baghel said.

The Chhattisgarh government has amended the Agriculture Produce Market Act to protect the interests of farmers and general public of the state, vis-a-vis the three new agricultural laws.

The government of Chhattisgarh has started Rajiv Gandhi Kisan Nyay Yojana, under which it would transfer Rs 5,750 crore directly into the bank accounts of 19 lakh farmers in the state.