Pakistan, India agree on ’80 per cent and beyond’ on Kartarpur draft agreement 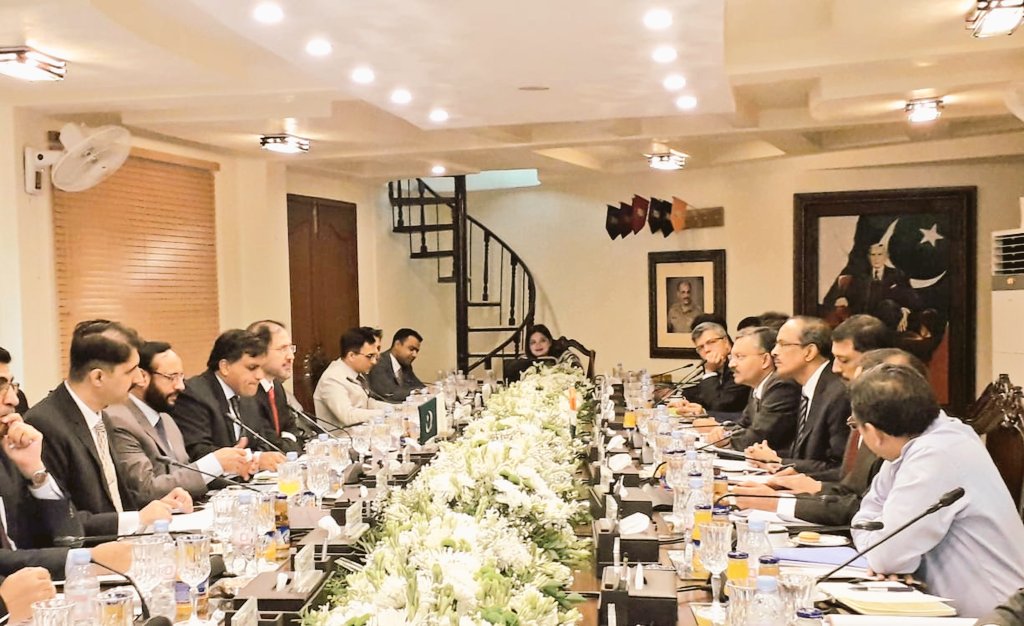 Pakistan, India agree on ’80 per cent and beyond’ on Kartarpur draft agreement

LAHORE:Pakistan and India agreed “80 per cent and beyond” on the draft agreement and operationalisation of the landmark Kartarpur corridor, a senior Pakistani official said Sunday after a marathon meeting between the officials of the two countries in Wagah.

2nd round of talks with Pakistan on #KartarpurCorridor held today. Progress made in discussions on modalities & draft Agreement. We are fully confident to commence pilgrimage through #KartarpurCorridor on 550th birth anniversary of Guru Nanak in Nov 2019. https://t.co/vyHtpehUz5 pic.twitter.com/ipU4ThjGE9

The corridor will connect Darbar Sahib in Pakistan’s Kartarpur with Dera Baba Nanak shrine in Gurdaspur district and facilitate visa-free movement of Indian Sikh pilgrims, who will have to just obtain a permit to visit Kartarpur Sahib, which was established in 1522 by Sikh faith founder Guru Nanak Dev.

Briefing the media at Wagah after about four hours long second round of talks Sunday, Foreign Office spokesperson Mohammad Faisal, who was leading the 13-member Pakistani delegation, said there has been positive progress in the corridor talks.

“There are positive developments… Both countries have agreed 80 per cent and beyond regarding the Kartarpur corridor agreement,” he said, adding that the two sides would resolve the remaining 20 per cent issues in the next meeting.

When asked about the joint statement, Faisal said: “Until we agree on the final draft, we cannot share. On unresolved issues, we think we will have to have another sitting.”

Replying to a question about how many Indian Sikhs will be issued permit at the opening of the corridor in November, he said: “It may be 5,000 or 8,000…I cannot give the exact number. This has to be decided yet.”

Faisal, who is also the Director General of South Asia and SAARC, further said that Pakistan has planted a sapling of peace.

“This is a corridor of peace and we have planted a sapling of peace,” he said.

Before the start of the meeting, Faisal said Pakistan is committed to opening the corridor for Indian Sikh pilgrims on the 550 birth anniversary of Guru Nanak Dev.

“Pakistan Prime Minister Imran Khan wants peace in the region. He is committed to open the corridor in time for the 550th birth anniversary celebrations of Guru Nanak in November 2019,” he said.

The Indian delegation arrived at the Wagah border after 9 a.m. (local time) and the meeting between the two sides began soon after. The eight-member Indian delegation was headed by S C L Das, Joint Secretary (IS-I), MHA.

The first round of talks was held in Attari on March 14 in the shadow of escalating bilateral tensions following the Pulwama terror attack by a suicide bomber of Pakistan-based Jaish-e-Mohammed on February 14.

The second round of talks, which were originally scheduled on April 2, was cancelled by India after Pakistan nominated Khalistani separatist like Gopal Singh Chawla in a 10-member Pakistan Sikh Gurdwara Parbandhik Committee (PSGPC).

Pakistan dropped Chawla from its team which held talks with India on Sunday after New Delhi objected to the presence of the Khalistani separatists in the committee which would facilitate Sikh pilgrims after opening of the corridor. Chawla is the secretary-general of the PSGPC.

“Chawla has been removed from the secretary general post and he is no longer a member of the PSGPC. Chawla is also not part of the Pakistani delegation which is taking part in the second round of talks in Wagah,” a senior official of the Evacuee Trust Property Board (ETPB) told PTI.

The ETPB is a statutory board that manages religious properties and shrines of Hindus and Sikhs who had migrated to India following the partition.

The official said the PSGPC Pardhan (president) Tara Singh has also been removed and the new election will be held soon to elect new president and the secretary-general.

“Apparently, removal of Chawla is a damage control step by the Imran Khan government,” the official said, adding that he had become so controversial that the Khan government was forced to revamp the whole PSGPC.

Pakistan is building the corridor from the Indian border to the Gurdwara Darbar Sahib while the other part from Dera Baba Nanak up to the border will be constructed by India.

Kartarpur Sahib is located in Pakistan’s Narowal district across the river Ravi, about four km from the Dera Baba Nanak shrine.

Khan’s government has earmarked Rs 100 crore in the federal budget 2019-20 for the development of the corridor.

The funds will be used for land acquisition and development of infrastructure of Kartarpur under Public Sector Development Programme (PSDP) for the next financial year 2019-20.