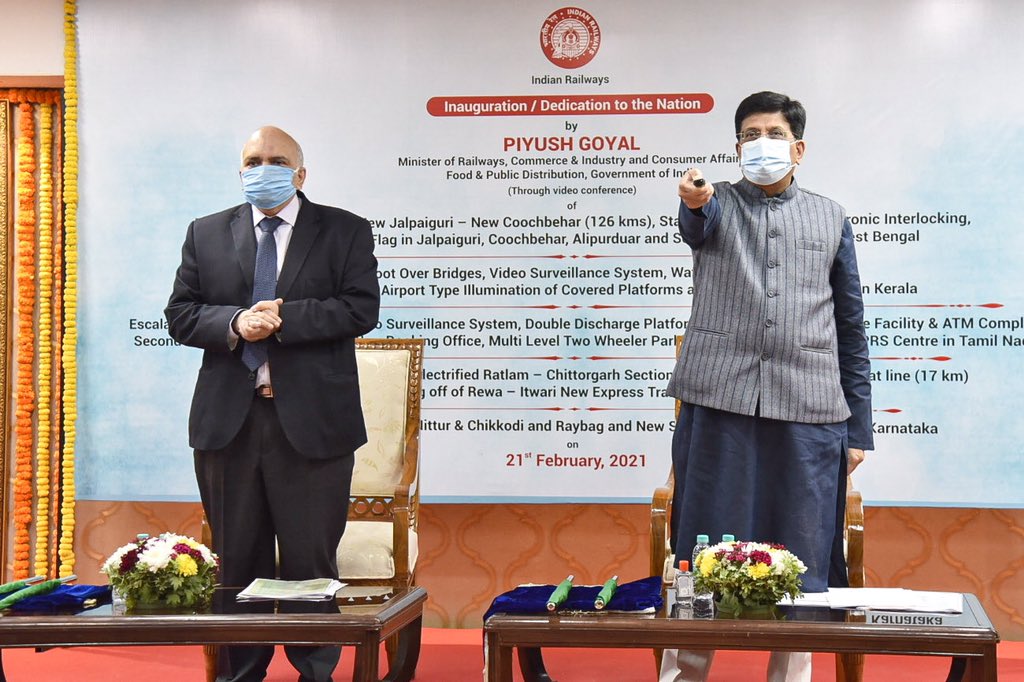 About 88 Railway projects were dedicated to the Nation worth more than Rs 1000 crore making Indian Railways future ready. Various dignitaries were also present on this occasion at different locations.

While inaugurating the rail projects in Kerala, Goyal said that it’s important to improve connectivity in the state which is a keeper of Indian Heritage and for the railway passengers using the various amenities in the state of Kerala. Our effort is that we give a big lift to the infrastructure to the railways in Kerala. We give a boost to the facilities connecting Kerala with the rest of the country.

“We ignite more economic activity in the area and transform the railway network through the state of Kerala. The budget being allocated for Kerala is continuously increasing year on year. We are committed to having a vibrant railway network across Kerala in the days and months to come,” he added.

In Kerala, Foot Over Bridges have been provided three locations at a total cost of Rs.9.56 Crore at Kollam, Kundara and Kochuveli. These foot over bridges will enhance the mobility of passengers and ease crowd dispersal at these important stations.

Facilitating ease of access to Platforms and concourse areas, particularly for senior citizens, sick and divyang passengers. Lifts have been provided at Kanhangad and Aluva at a total cost of Rs. 1.60 Crore.

At two stations in Kerala, Thiruvananthapuram Central and Thrissur, Airport type illumination of covered Platforms has been provided at a total cost of Rs.42 lakhs. This will enhance the passenger experience and will help make the journey a memorable one.

Platform raising works have been completed at Tanur at a cost of Rs.1.39 Crore for ease of boarding and deboarding of passengers especially the elderly and divyangjan passengers. As an energy efficient and power saving measure, 100 Kwp Solar Plants have been commissioned in Thrissur and Thiruvananthapuram at a cost of Rs.42 lakhs.

While inaugurating rail projects in Tamil Nadu, Goyal said that We are committed to making Tamil Nadu Railways a fully electrified network so there is no pollution due to the Railways. We have doubled the speed of electrification in last 6-7 years. In next 2 1/2 years, entire rail network of the state will be electrified. We are also constructing the first ever vertical bridge, Pamban bridge, which will connect the Ram Setu and give pilgrims visiting Rameshwaram and Dhanushkodi easier access in that region. We have done 100% LED lighting in all the Railway Stations and service buildings in the State of Tamil Nadu.

“It also boasts of the first Green Corridor, 114 km stretch from Rameswaram to Manamadura. It is India’s first green Railway corridor. On 17th February, Prime Minister Shri Narendra Modi ji flagged off a new weekly train which will connect Chennai to the Statue of Unity, brining Tamil Nadu closer to the Iron Man of India in Kevadiya. Indian Railways is adding the third dimension to Tamil Nadu’s development, so now instead of double engine of the Central & State Govt of Tamil Nadu working as partners in progress, we have third engine provided by Indian Railways,” he added.

For the convenience and safety of passengers, Foot Over Bridges have been provided at 10 locations in Tamil Nadu at a total cost of Rs. 23.32 Crore at Ambattur, Arakkonam, Elavur, Mambalam, Mettupalayam, Tiruppur, Gangaikondan , Kadayanallur,Nagercoil Jn, Vanchi Maniyachchi .These foot over bridges will enhance the mobility of passengers and ease crowd dispersal at these important stations minimizing the chances of mishap.

To enable hassle-free access to Platforms and other areas of railways stations, Escalators have been commissioned at 6 stations in Tamil Nadu, namely, Egmore, Mambalam, Tambaram, Tiruvallur, Erode, Thanjavur a total cost of Rs.16.61 crore. Lift facilities at a total cost of Rs.2.38 Crore have been provided at Coimbatore Jn and Nagercoil Jn railway stations. These escalators and lifts will immensely benefit senior citizens, divyangs and sick passengers, among others.

For better surveillance of railway stations, Video Surveillance Systems that take the aid of cutting-edge technologies, have been provided at 18 locations a total cost of 10.01 Crore. Video Surveillance Systems have been installed at Chengalpattu, Thiruvallur ,Erode, Salem, Kanniyakumari, Tirunelveli, Tuticorin, Mayiladuthurai, Thanjavur, Villupuram and 8 other stations in Tamil Nadu with Central Monitoring System in Chennai.

At various other stations in Tamil Nadu, improved passenger amenities have been provided at a total cost of Rs.4 Cr – Multi level two-wheeler parking at Katpadi, Double discharge Platform at Guindy, Second Entry Circulating Area and Booking Office at Arakkonam, PRS centre and Station building at Nagercoil Town and Passenger convenience facility with ATM complex at Madurai, to mention a few.

While inaugurating Rail projects in Karanataka, Goyal said, “Today, I pay tribute to late Shri Suresh Angadi for exemplary work he has done for Railways and for the state of Karnataka. When the both Central Govt. led by Narendra Modi ji, State government work together as a team that it gives a double engine speed to progress and to growth and Indian Railways gives the third dimension and when all three central govt., state govt. supported by the Indian Railways work together, unprecedented progress can be seen in the state of Karnataka.

Today, doubling of track from Gubbi to Nittur, while it may seem like a small stretch, it is a part of a larger vision to double the railway line from Arsikere to Tumukuru on the Benguluru-Hubballi line. The larger project between the Londa and the Miraj 186km project will be completed in the next two years. The Raibag railway station has also been provided with amenities and all of these projects put together will provide a catalyst for Karnataka’s progress and economy development. The Indian Railways is committed to improving all the railway facilities in the state.

The suburban railway in Bengaluru also will transform the transportation in the state of Karnataka and for the people of Bengaluru to which the Govt. of Karnataka and Indian Railways both are very committed and working in partnership through the K-ride a special purpose vehicle set up between Indian Railways and Govt. of Karnataka. Several other projects in Karnataka are being done to improve the facilities and ensure very good and happy experience for all the passengers using the Indian Railways. Integration of the metro services of the Bengaluru with the suburban railway is being tried to provide seamless transportation.

Doubling of lines between Gubbi-Nittur (9 Km) stretch is part of the doubling project between Arsikere and Tumakuru (96 Km) on the Bengaluru-Hubballi line between Tumakuru & Arsikere. Arsikere and Tumakuru project was sanctioned in 2015-16 at a cost of Rs.783 Cr. Doubling of Railway track in this section will increase line capacity of important line connecting Bengaluru to Hubballi, Belagavi, Mumbai etc., traversing all interior districts of Karnataka and enable faster movement of trains and improve intercity connectivity

The section between Gubbi and Nittur has been doubled at a cost of Rs.75.5 Cr. Along with doubling, 2 Major bridges and 15 Minor bridges have been constructed.

Additional passenger amenities have been provided at Gubbi and Nittur Railway station. Platform shelter, High level platforms, Foot over bridge, toilets, benches and water booths have been constructed at Gubbi & Nittur along with doubling.

Doubling of Railway track in this section will increase line capacity of important line connecting Bengaluru to Hubballi, Belagavi, Mumbai etc., traversing all interior districts of Karnataka. It will enable faster movement of trains and improve intercity connectivity.

New Station Building has been provided at Raybag Railway Station along with the doubling with upgraded passenger amenities.

At Raybag Station following facilities have been provided:

 One Foot Over Bridge

Handling of train operations has been optimized with provision of latest Signalling system and indigenously developed state of the art electronic interlocking.

While inaugurating Rail Projects in Madhya Pradesh, Shri Piyush Goyal said that this year in budget 2021-22 recently introduced by Hon’ble Finance Minister Nirmala Sitharaman, 7700 cr. have been allocated for different railway projects in Madhya Pradesh. The Central Government, State Government and Indian Railways is serving the state as the third engine. A big solar power plant is coming up in Rewa.

Indian Railways is committed to electrifying completely its entire network by December 2023 and all trains either passengers or goods will run on electric traction and will eventually reduce pollution in centrally-located Madhya Pradesh. In the next series, Indian Railways will be able to run its entire network with the use of renewable energy by 2030 and will be world’s first biggest railway.

This is also the vision of Prime Minister to give convenient facility to passengers. Now most of the trains are running with LHB coaches. Safety is improved. After March 2019, no passenger death occurred in railway accident in the last 22 months. Indian Railways is determined to contribute in the country’s progress. This year around 2 lac 15 thousand crore investment Indian Railways will put in which will bring historic progress in Indian Railways.

To provide convenience to Divyang, old aged and ailing passenger, three lifts have been installed in the platform no. 1,2/3 and 4 of Gwalior Station with the cost of 92 lac. Moreover, to modernize Gwalior station, Rail Vikas Nigam Ltd. has undertaken redevelopment work. Under this redevelopment, Gwalior Stations is being converted into world-class transport center to give better travel experience to passengers. This redevelopment will give boost to tourism, generate employment and will give rise to socio-economic development.

Electrification of Ratlam-Chittorgarh section will save diesel and will contribute in green energy. Conversion from diesel to electric traction of this section will also save 27.54 crore per year. This electrification has been done with the cost of 205.44 crore.

Provision of lifts at Betul and Pandhurna stations will help the Divyangjan, senior citizens and other passengers to go from one platform to the other easily.During the event, Shri Piyush Goyal also flagged a passenger service from Rewa to Itwari.