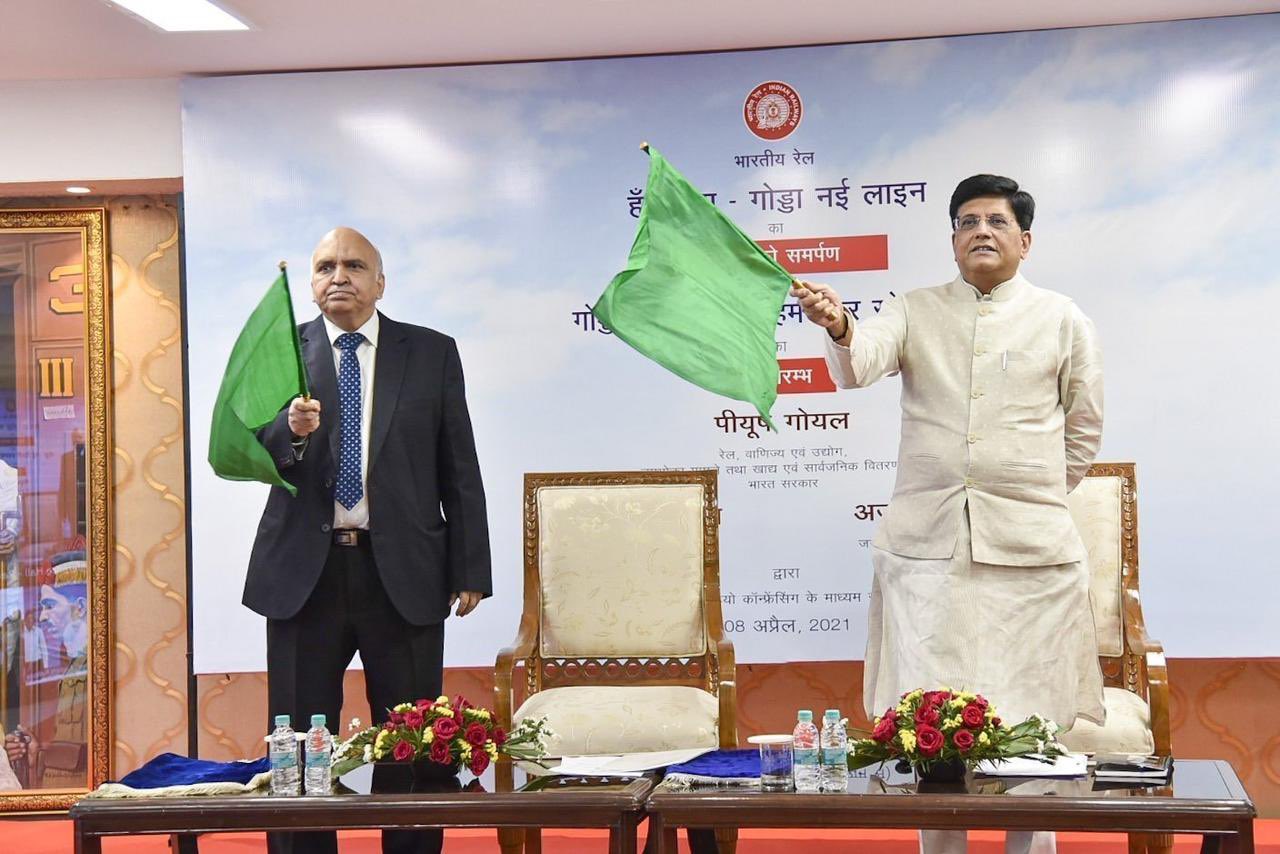 This new line will benefit in better transportation facility, cost effective and quicker movement of commodities and will give impetus to social-economic development in Dumka & Godda in Jharkhand.

During the event, Chairman & CEO, Railway Board, Shri Suneet Sharma and other dignitaries were present virtually.

Speaking on the occasion, Goyal said, “Jharkhand is famous for minerals and many holy places, Indian Railways is contributing in turning its potential to reality. This project Hansdiha-Godda was approved in 2011, however no progress was made until 2014.

With this new Hansdiha-Godda Rail line, the area would develop at a faster pace generating more employment opportunities, in future, Kisan Rail may be started to send the produce of farmers from this area.”

Shri Goyal also added that presently 36 Rail projects are being executed in Jharkhand with the investment of Rs 20,000 crore. He expressed that Eastern Dedicated Freight Corridor which passes through Jharkhand would provide impetus to the economy of the state.

Indian Railways strives towards providing new infrastructure, enhancing capacity of its network and providing better facilities to the esteemed customers. Towards this goal, Indian Railways has commissioned Hansidiha – Godda new line projects in Jharkhand. Total expenditure of Rs.663 crore has been spent for the development of infrastructure work and providing passenger amenities in the State of Jharkhand.

Commissioning of Hansdiha – Godda new line remained a long pending demand of common people of Jharkhand. This will accelerate infrastructure building and connectivity enhancement for this part of State. Total length of the new line project is 32 km, which runs through Godda and Dumka districts of Jharkhand. Total No. of stations in the new line project of Jharkhand is five – Hansdiha, Gangwara, Poreyahat, Kathwan and Godda. Infrastructure development and passenger amenities have been augmented in all the five stations. The speed potential of this 32 km new stretch is 120 km per hour. While commissioning the new line project, two major bridges and thirty-three minor bridges have been constructed.

Hansdiha-Godda Railway line is a Coal Priority Project and Railways taken all possible steps for speedy completion of the project keeping in view the movement of industrial inputs like coal and rapid development of business and industries as well as employment generation in Jharkhand.

Further, introduction of train services in this new line will benefit commuters to proceed to Capital of India i.e. Delhi. Introduction of this new superfast Humsafar Express train from Godda to New Delhi will facilitate passengers’ comfortable journey to New Delhi via Bhagalpur.