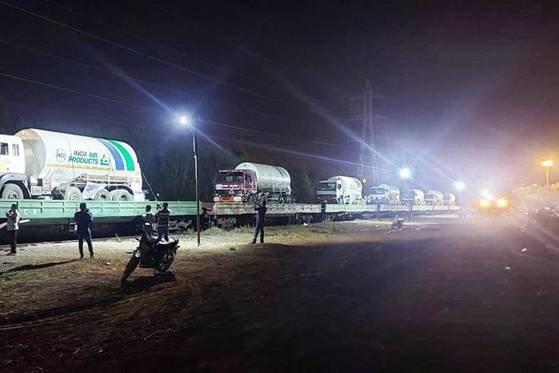 NEW DELHI: Public Sector Undertakings, under the Ministry of Steel, and other Private companies in the steel sector, in this hour of need, are with the nation and continuing their best to supplement the efforts of the Government in making available Liquid Medical Oxygen (LMO).

Total daily Oxygen production capacity of Steel plants is 2834 MT. In the Steel Sector, there are 33 oxygen plants (both with CPSEs and in Pvt.) of which 29 are tapped regularly.

Steel plant requires gaseous oxygen, primarily for steel making and for oxygen enrichment in Blast Furnaces, apart from some general purposes like lancing and gas cutting. Hence Captive Oxygen Plants in Integrated Steel Plants are designed to produce primarily gaseous products of Oxygen, Nitrogen and Argon and then routed through Pressure Reduction & Management System (PRMS) to meet the process need at desired pressure. Such plants can produce 5-6% maximum Liquid Oxygen (LOX) at the peak capacity, which is a highly pure product compared to the industrial oxygen. Plants can only optimize LOX production by sacrificing some gaseous Oxygen and optimize process parameters.

In the meantime, all out efforts are being made to enhance the production of liquid oxygen and for dispensing the same for which all oxygen plants whether in private or public are working 24×7 and dispensing oxygen. Steel plants are also filling oxygen cylinders and supplying to the States/hospitals.

Steel plants in both public and Private sector are striving hard to supply the liquid oxygen to differentstates.The Average delivery of Liquid Medical Oxygen by SAIL has been raised to more than 800 tonnes per day. Around 1150T of LMO was delivered on 23rd April, and the quantity delivered yesterday was 960 Tonnes. SAIL has been continuously enhancing LMO supply. Total Liquid Medical Oxygen supplied from SAIL integrated steel plants at Bhilai, Bokaro, Rourkela, Durgapur and Burnpur from August, 2020 till yesterday has been 39,647 Tonnes.

As far as RINL is concerned, in the last FY 20-21, it had supplied 8842 ton of LMO. This FY, from 13th April till today morning, more than 1300 ton of Medical Oxygen has been dispatched There is increase from 100 ton to 140 tons in last three days. First Oxygen Express had chugged off RINLVizag Steel Plant site on 22nd April, carrying 100 tons of Liquid Medical Oxygen to Maharashtra to meet medical exigencies of Covid patients.