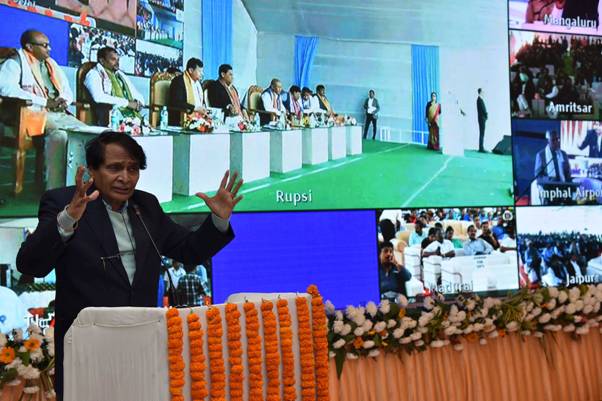 This was done in order to make them world class and future ready. These airports include Trivandrum, Calicut airports in Kerala, Mangaluru airport in Karnataka, Madurai airport in Tamil Nadu, Rupsi airport in Assam, Jaipur airport in Rajasthan, Amritsar airport in Punjab and Imphal airport in Manipur.

P. S. Kharola, Secretary, Ministry of Civil Aviation (MoCA), Dr.GuruprasadMohapatra, Chairman Airports Authority of India (AAI) and officers of MoCA and AAI were present on this occasion. AAI connected with formal events in different locations through video link which was attended by dignitaries of states.

Speaking on this occasion, Prabhu, said that Rs. 620 crore is being spent on 8 AAI airports in the country to upgrade and revamp airports infrastructure. The Minister further stated that aviation connectivity will not only help in the development of tourism but will also boost trade and airports at Rupsi, Assam and Imphal in Manipur will open up the entire South East Asia sector and airports at countries like Nepal and Bangladesh for tourism and trade.

Prabhu said that airports in the North East region will bring about huge transformative change and the states of North East will now become the fastest growing states in India. Suresh Prabhu said that these projects are not only foundation stones but are the foundation to empower people through connectivity.

India has the fastest growing aviation sector in the world and the Civil Aviation Ministry has recently launched UDAN 3.1 and invited bids for airlines to fly over as many as 28 to 30 routes in order to cover the North Eastern region of India, hilly terrain of Uttarakhand, Jammu, Himachal Pradesh and establish intra island connectivity at Andaman and Lakshadweep islands.

Civil Aviation Minister,  Prabhu, said that in the recently concluded Global Aviation Summit 2019 held in Mumbai in January this year, the Vision 2040 document with the theme “Flying for all” was released. Minister further said that the document estimates that India will need 200 airports with an investment of USD 40 to 50 billion to handle at least 1.1 billion passengers flying to, from and within the country.

In order to cater to this huge passenger traffic all round development of airports will have to take place in order to provide quality service to flyers. The scheduled airline fleet will rise from 622 at the end of March 2018 to 2,360till March 2040.This will fulfil the vision of UDAN scheme to open Indian skiesandachieve its objective of “SAB UDE – SAB JUDE”.