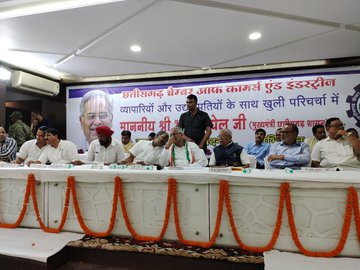 RAIPUR: The Chhattisgarh government has decided to reduce land allotment rates by 30 per cent in industrial areas in the state to promote industrialisation and create jobs, officials said on Saturday.

The announcement was made by Chief Minister Bhupesh Baghel while addressing representatives of industrial and commercial sectors at an event held here late Friday evening, a government public relation official said.

Baghel announced that the land allotment rates in industrial areas will be reduced by 30 per cent, while lease rent rate would be reduced from existing 3 per cent to 2 per cent.

He also announced several other benefits, including land at cheaper rates, subsidy on interest and tax rebates for food processing, minor forest produce and herbal-based units.

“The new policy pertaining to these announcements will be formulated within next two months. The state government is committed to development of industrial sector along with the agriculture sector. At the same time, core industries such as steel and cement would also be promoted,” he added.

Single window system would be facilitated to provide time-based approval for establishing industries in the state, he said.

“Presently, applications for setting up industries are not being accepted because of the unavailability of land. The new applications would be collected in industrial centres in all districts and land would be allotted by the Industry Department on first-come-first-serve basis,” Baghel said.

For industries that were not set up despite allotment of land, a time limit of one year would be given to establish the units, he said.

In case they fail to do so, the concerned land would be taken back on allotment rates and would be sanctioned to other eligible entrepreneurs, he added.

“A proposal would be sent to the government of India to increase the minimum number of employees required for compulsion of gomasta issuance under Factory Act to 10 or more for electricity-run industries,” he added.

Presently, it is compulsory for small entrepreneurs to get their gomasta licence (basic business licence) even if they have one person employed under them.