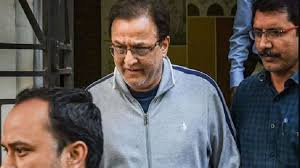 During the hearing, the ED told the special Prevention of Money Laundering Act (PMLA) court that Kapoor had sanctioned loans worth Rs 30,000 crore to different entities during his tenure.

Kapoor, 62, former MD and CEO of the private bank, was arrested by the ED here on Sunday under provisions of the PMLA as he was allegedly not cooperating in the probe.

He was earlier remanded in the ED custody till March 11. As his remand ended on Wednesday, he was produced before special court judge P P Rajvaidya.

The court extended his ED custody till March 16 as the central investgating agency had sought it for further probe.

While seeking his custody, the ED told the court that loans worth Rs 30,000 crore were given to various entities when Kapoor was on the bank’s panel.

“Of this, Rs 20,000 crore turned into bad debts. We need to be probe in great detail how the money has travelled,” the agency told the court.

The Reserve Bank of India (RBI) had last week imposed a moratorium on the capital-starved Yes Bank, capping withdrawals at Rs 50,000 per account, and superseded the board of the private sector lender with immediate effect.