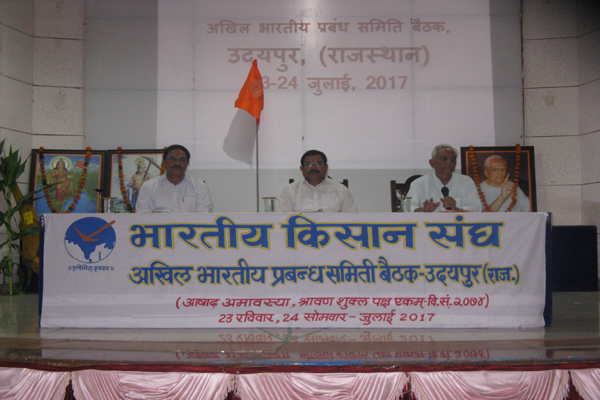 NEW DELHI: When the draft of three important bills related to farmers in the country was being prepared, the Bharatiya Kisan Sangh (BKS), affiliated with the RSS, passed a proposal after consulting 15,000 villages of the country and sent a bouquet of suggestions to the Ministry of Agriculture.

The Bharatiya Kisan Sangh has expressed its displeasure over the neglect of these 15,000 proposals in the farmers’ bills. It is being said that Agriculture Minister Narendra Singh Tomar had reportedly agreed to the proposals. Then why did the Ministry ignore the suggestions? According to the BKS, ignoring suggestions from farmers displays that bureaucrats dominate the Ministry of Agriculture.

The BKS has reiterated the demand from the government to introduce a new law to guarantee the minimum support price (MSP).

Badrinarayan, the National General Secretary of the Bharatiya Kisan Sangh, told IANS that farmers’ committees have been formed in about 80,000 villages in the country.

Raising the question, Badrinarayan said that the misdeeds of private players had come to the fore in many parts of the country. In Shimla, many private players had made a fool of millions of farmers in the name of buying apples, while in Nashik, incidents of fraud have come to light. In such a situation, if the government is making parallel arrangements to the mandis, what is the guarantee that farmers will get a fair price?

The BKS believes that the government could have avoided unnecessary ruckus on the Bill if it so wanted.

The government only had to guarantee the minimum support price (MSP) in the Bill. If that were the case, the government would not have to give clarifications through advertisements in newspapers and party leaders repeatedly about the MSP.

Badrinarayan said that the way the three Bills were passed in a hurry and the President also ratified them, shows that the government is no longer in the mood to get on the backfoot on the issue.

In such a situation, the BKS demands a fourth bill guaranteeing MSP. If the government does not get proper assurance, the farmers union will decide on the future course of action.