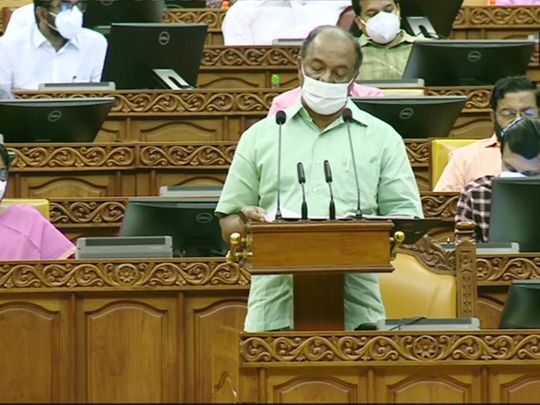 THIRUVANANTHAPURAM: Grappling with the Covid-19 pandemic, the CPI(M)-led LDF government in Kerala announced a Rs 20,000 crore revival package and allocated Rs 1,500 crore for free vaccination in its ‘health oriented’ budget on Friday, while not imposing any fresh taxes.

Special loan schemes for financial rejuvenation, relief package for conservation and infrastructure improvement in the coastal areas and significant allocation to address extreme poverty also found a place in the first budget of the second Pinarayi Vijayan government for 2021-22 fiscal.

While the oppositionCongress-led UDF flayed the maiden budget of the Vijayan government as a “political stunt”, the BJP-NDA dubbed it as a “disappointment”.

Presenting the budget and vote on account in the assembly, Finance Minister K N Balagopal said the government was compelled to adopt a firm stance, “health first” or “health above all” as its vision for development in the present circumstances.

A six-pronged strategy was announced to tide over the pandemic-induced ”health emergency” in Kerala and prepare it to fight against the possible third wave of the virus infection in future.

A first-time legislator, Balagopal said though the budget presented by his predecessor T M Thomas Isaac early this year was a comprehensive one, the government came up with a ‘revised budget’ now in view of the rapid spread of the coronavirus and concerns about its possible third wave.

“A second COVID package of Rs 20,000 crore is announced now to address the health, social and economic challenges that are emerging in the backdrop of the second wave,” he said.

In the beginning of the pandemic, the previous LDF government had declared a package amounting to Rs 20,000 crore to help those who were suffering from the adverse impact of the Covid lockdown.

Under the present package, Rs 2,800 crore has been earmarked to tackle the health emergency, Rs 8,990 crore was set aside for direct disbursement to those facing crisis after losing their livelihood, while another Rs 8,300 crore to boost the economy by giving loans and interest subsidies to the needy.

The budget allocated Rs 10 crore for the production of COVID-19 vaccine and its related research at the Institute of Advanced Virology (IAV) here.

“The IAV will take the lead in inviting vaccine manufacturers to set up their units in the Life Science Park. Rs 10 crore is earmarked for this,” the minister said.

An additional Rs 1,500 crore was earmarked for providing free vaccination to all aged above 18 years and purchasing allied equipment for the inoculation drive, a proclaimed policy of the Left government.

Among several allocations to strengthen the health sector, Balagopal set aside Rs 636.5 crore for setting up isolation wards with 10 beds exclusively for contagious diseases in all taluk, district and general hospitals besides Rs 50 crore for building isolation blocks in three medical colleges.

Seeking to revive the economy, the budget announced a slew of low interest loans to help agriculture, MSMES, neighbourhood groups and so on and an amount of Rs 100 crore was provided for the interest subvention.

A Venture Capital Fund with a corpus of Rs 100 crore to activate the rapid growth of small scale enterprises and start-ups has also been proposed, while Rs 10 crore outlay to provide low interest loans for SC/ST entrepreneurs, was also part of the financial revival steps.

In order to resolve the issues in the tourism sector, a rejuvenation package would be implemented, he said, adding that an amount of Rs 30 crore was earmarked as government share for the same.

Wooing the fishermen community, the budget proposed Rs 11,000 crore-worth development programmes in the coastal belt of the state in the next four years.

“It is expected that this development package, comprising coastal conservation project, coastal highway project and wayside amenity project, will provide a huge economic stimulus to the coastal sector,” he said.

The Finance Minister said the extreme poverty reduction scheme would be implemented with the participation of local self government institutions and an amount of Rs 10 crore was initially earmarked for the same.

Efforts would be made to implement at least 12 crore person days of employment through employment guarantee schemes, he said.

“As part of creating Kerala knowledge society, the allocation for ”knowledge economy fund” for skill promotion and technological transformation is increased from Rs 200 crore to Rs 300 crore,” the finance minister said.

Due to Covid pandemic, as many as 14,32,736 NRKs (non-resident Keralites) have returned to the home state and the budget allocation towards various welfare schemes for expatriate Keralites has been enhanced to Rs 170 crore.

“During economic slowdown and natural disasters, the government could have stepped aside by reducing the expenditure.But, this is not the approach of the Left Front. During a crisis, the Left approach is to stand upfront and save the society even through borrowings,” he said.

In the last financial year, the state’s GSDP came down by 3.82 per cent compared to the previous year, he said, adding that the growth rate that was positive for decades fell under the impact of Covid-19 induced lockdown and the state revenues recorded a decline of 18.77 per cent.

He flayed the Centre for its alleged delay and uncertainty in releasing even the legally mandated GST compensation to the State also caused considerable financial difficulties.

The Centre’s increasing tendency to rely on cess, particularly on petroleum products, had an adverse impact on the state finances by reducing the divisible pool, that is to be shared with States, he said.

As a result, revenue deficits grew and states were forced to borrow, the finance minister said.

Despite the state reeling under acute financial crisis, Balagopal opted not to impose any fresh taxes.

“Though tax increase is inevitable in the States financial situation, no new tax proposals are announced in the context of Covid pandemic,” he added.

The minister however indicated that the state could not withstand without increasing the tax and non-tax revenues in future.

Leader of the Opposition in the Assembly, V D Satheesan (Cong) said: “The first part of the budgetis a complete political statement.Budget is the annual financial statement. We are of the opinion that it was not right to include politics in the budget speech,” he said.

Describing the budget as “disappointment”, senior BJP leader and union minister V Muraleedharan said it was an eyewash to cheat people.