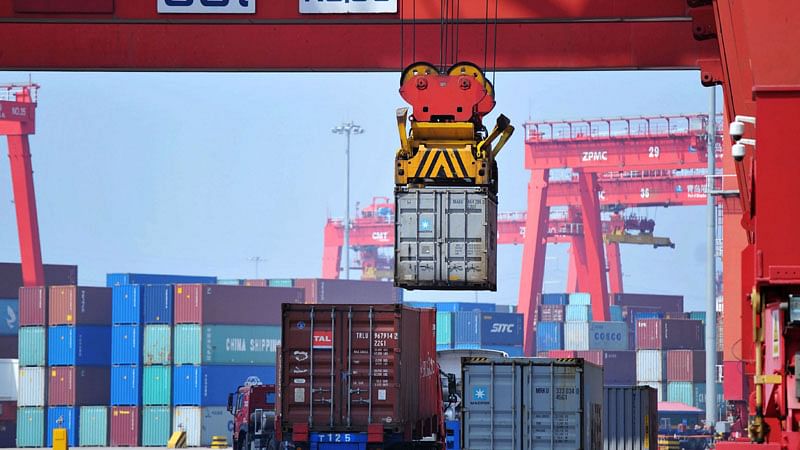 NEW DELHI: India’s exports grew 47.19 per cent to USD 35.17 billion in July on account of healthy growth in petroleum, engineering, and gems and jewellery segments, according to provisional data of the commerce ministry.
Imports during the month also rose by 59.38 per cent to USD 46.40 billion, leaving a trade deficit of USD 11.23 billion.
Exports of petroleum, engineering, and gems and jewellery in July increased to USD 3.82 billion, USD 2.82 billion and USD 1.95 billion, respectively, the data showed.
However, exports of oilseeds, rice and meat, dairy and poultry products recorded negative growth in the month under review.
Imports of petroleum, crude, and products soared by 97 per cent to USD 6.35 billion.
Similarly, imports of gold zoomed 135.5 per cent to USD 2.42 billion, while pearls, precious and semi-precious stones inbound shipments stood at USD 1.68 billion in July.
However, imports of transport equipment, project goods and silver posted negative growth in the month.
Further, exports to the US, UAE, and Belgium increased to USD 2.4 billion, USD 1.21 billion and USD 489 million in July.
Exports during April-July 2021-22 rose by 73.86 per cent year-on-year to USD 130.56 billion, as against USD 75.10 billion in the same period last year.
“Till July, India’s merchandise exports have achieved 32.64 per cent of USD 400 billion. Target for the remaining eight months is USD 269.44 billion or USD 33.68 billion per month,” the commerce ministry said.
Commenting on the data, Federation of Indian Export Organisations (FIEO) President A Sakthivel said the global demand during this period has also remained buoyant as the order booking positions of the exporters have still been impressive.

“The need of the hour is to soon notify the RoDTEP (Remission of Duties and Taxes on Exported Products) rates to remove uncertainty from the minds of the trade and industry, besides addressing some of the key issues including priority status to exports sector, release of the necessary funds for MEIS (Merchandise Exports from India Scheme), resolving risky exporters issues, and augmenting the flow of empty containers,” he said.