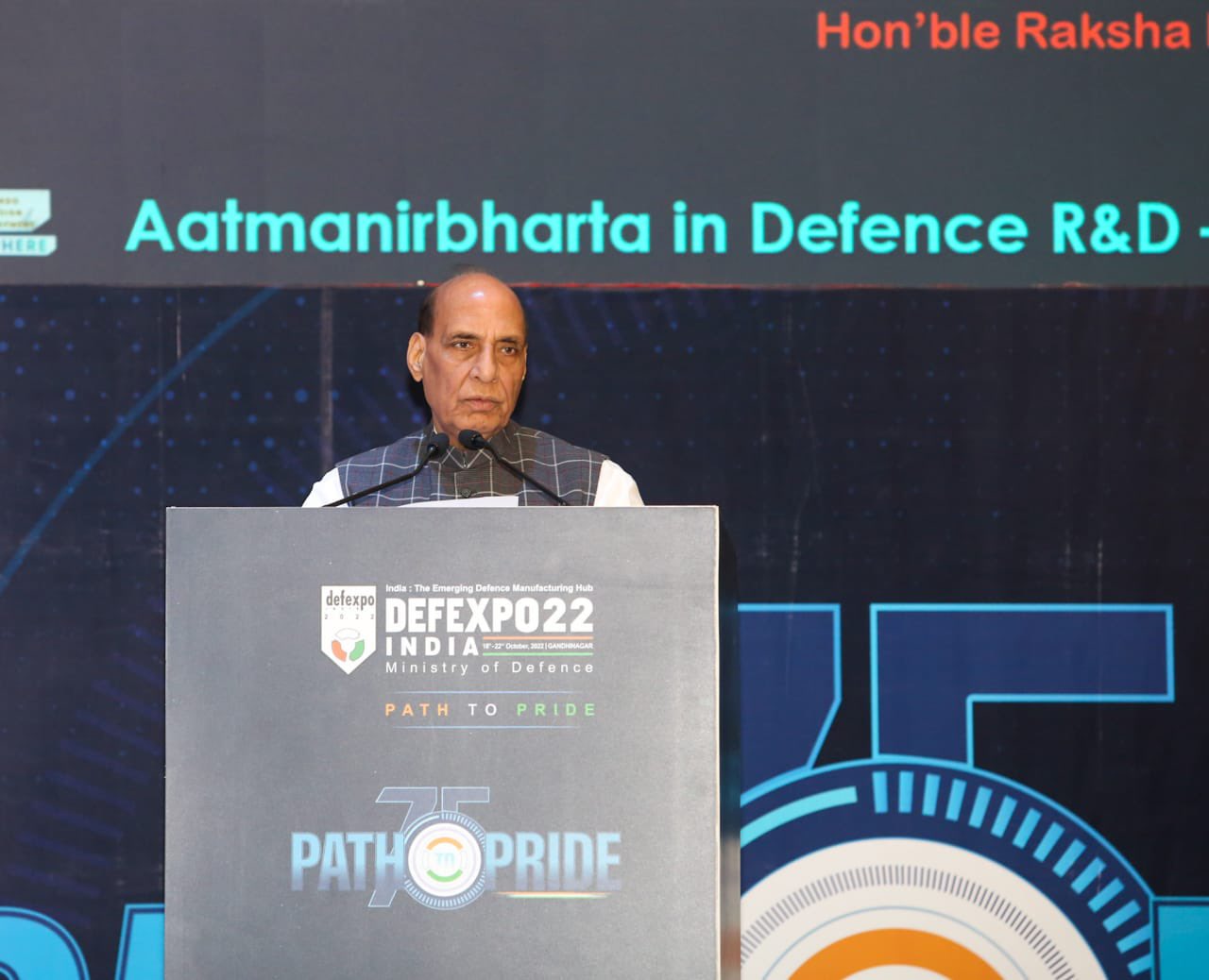 GANDHINAGAR:Terming exports as a key pillar for long-term sustainability of the domestic defence industry, Defence Minister Rajnath Singh on Thursday said the government has set itself a target of achieving defence exports of USD 5 billion by 2025.

Speaking at an event at the 12th Defence Expo here, he also said the government was eyeing overall turnover of USD 22 billion in defence production in the same timeframe. “Domestic demand alone may not always provide economies of scale to make profitable investments and sustain them,” Singh said, speaking at a seminar jointly organised by the US-India Business Council and Society of Indian Defence Manufacturers at Mahatma Mandir. The seminar was on the theme ‘New Frontiers in US-India Defence Cooperation: Next Generation Technology, Innovation & Make in India’.

“The USD 5 billion export target set for 2025 reflects the intent of the government for export-oriented manufacturing,” the minister added. He also invited US defence companies to set up manufacturing units in India and develop technological collaboration with Indian industries to create a “global supply chain free from vulnerabilities and uncertainties”. Singh highlighted the steps taken by the government to boost local defence manufacturing such as increase in procurement categories.

“We are delighted to work with the US, our valued partner, to strengthen our commercial and strategic relationship and to attract US investment for creating a high-technology defence production ecosystem in India. For India, collaboration with US companies would be an important strategic force multiplier, apart from being wealth and job creator,” Singh added.

The path to ‘Atmanirbhar Bharat’ or self-reliant India consisted of a comprehensive set of policy frameworks that seeks to build indigenous technological and production capacity and capability with cooperation, participation and collaborations with reputed institutions and Original Equipment Manufacturers (OEMs) from friendly nations, he said.

“The main objective is to fulfil the requirements of Indian Armed Forces, and at the same time, create long-term linkages to the global supply chains of the foreign OEMs to meet global demands,” he said. Through these linkages, India looks forward to collaborating for a “secure and resilient global supply chain for the free world to ensure uninterrupted and reliable access to defence equipment and other strategic materials for our nation and our partners, including the US,” he added.

Earlier, speaking at the ‘Invest in Defence’ event as part of the Expo, he appealed to investors to approach him or defence ministry officials without any hesitation to resolve issues. The Indian defence industry is at an important juncture and not just large corporates but even start-ups and MSMEs (micro small and medium enterprises) are now associated with the sector, the Union minister said. “The Indian defence industry is the sunrise sector of the future,” he added.

“The government is making efforts to take domestic defence production from the current USD 12 billion to USD 22 billion by 2025. We may even surpass this target of USD 22 billion. There is no dearth of opportunities in the defence sector,” Singh said.

“In the past, doors of the Defence Ministry used to remain shut for private players. The defence ministers and officials of the ministry used to avoid meeting investors thinking that someone would point a finger at them. But we are not worried about that. Our doors are always open for you,” he told industry representatives.

Post independence, for a long time “India could not achieve freedom from the belief that we will have to compromise on socio-economic front if we focus more on increasing defence capabilities,” the minister said.

“For a long time, there was a belief that defence and development are two opposite poles. Which means that if we focus on socio-economic development, we will have to compromise on our defence capabilities. But now, I am glad the country has come out of that notion during the last few years,” he said.