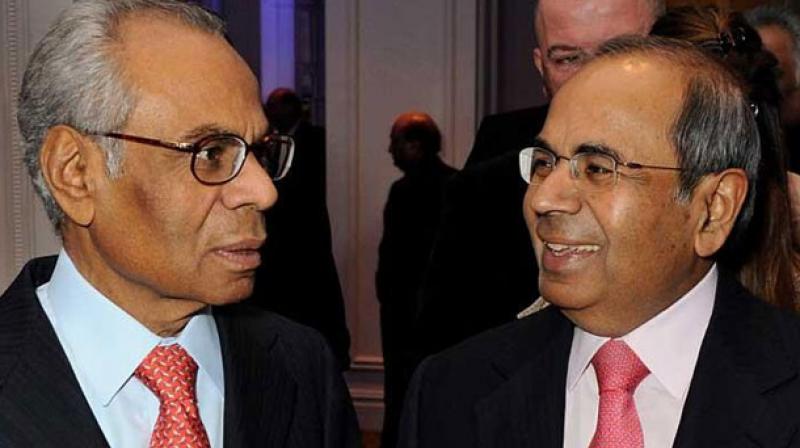 LONDON: Indian-origin brothers dominate the annual rich list of Britain’s wealthiest, with the Hinduja brothers ranked at No. 1 with a fortune of 22 billion pounds followed by Mumbai-born Reuben brothers in second place with 18.66 billion pounds.

Srichand and Gopichand Hinduja, who run the Hinduja Group of companies in the UK, registered a 1.35 billion pounds jump in their fortunes over the previous year to return to the top of the Sunday Times Rich List’ after topping it back in 2014 and 2017.

“Whether or not Britain leaves the EU, Gopi Hinduja is convinced it can forge a closer relationship with his family’s homeland,” notes the newspaper’s profile on the 79-year-old Co-Chair of the Hinduja Group, G P Hinduja.

The London-based industrialist, along with UK-based brother Sri, 83, and their brothers Prakash, 73, and Ashok, 68, who live in Geneva and Mumbai respectively, control more than 50 companies with a total turnover of nearly 40 billion pounds worldwide in 2018, notes the Rich List.

The family occupies four interconnected London homes in Carlton House Terrace, bought from Queen Elizabeth II in 2006. Their business empire was founded by father Parmanand in Mumbai in 1914.

The Hindujas, described as devout Hindus eschewing meat and alcohol, have stakes in oil and gas, IT, energy, media, banking, property and healthcare. Some of the biggest hike in profits last year came from London-registered Hinduja Automotive, which includes North Yorkshire bus maker Optare and saw profits rise by 50 per cent to 337 million pounds on 3.5 billion pounds sales in 2017-18.

They had acquired former British Prime Minister Winston Churchill’s old War Office in London’s Whitehall for 350 million pounds back in 2014 and plan to open it as a luxury hotel with the Raffles group by 2020.

Mumbai-born siblings David, 80, and Simon, 77, with interests across property and internet, have been on a buying spree, taking hold of 1 billion pounds of London property last year. The Reuben brothers snapped up Mayfair’s 300-million pounds Burlington Arcade, Shoreditch’s Curtain hotel and a 132 million pounds block in Piccadilly.

“The pair could be excused for feeling flush after selling another stake in their Global Switch data centres for 2.1 billion pounds last July, two years after banking 2.4 billion pounds for a separate chunk of the business,” the Sunday Times’ notes.

The brothers, who were ranked fourth in 2018, also saw a massive 3.56 billion pounds jump in their fortunes over the previous year to come in at second this year.

Another Indian-origin billionaire, Lakshmi N Mittal, suffered 3.99 billion pounds in losses to slip down to No. 11 in this year rich list, from No. 5 in 2018. The Rajasthan-born steel magnate logged an estimated fortune worth 10.66 billion pounds last year as he gets set to take control of his first steel plant in India with a purchase from Essar Steel.

Mittal is followed in the list by Indian mining magnate Anil Agarwal, who had a good year and registered a 8.72 billion pounds spike in his fortunes to be ranked 12th with a fortune estimated at 10.57 billion pounds.

Other prominent billionaires who improved their fortunes in the 2019 analysis, which includes around 45 Indian-origin super-rich, includes textiles and plastics industrialist Sri Prakash Lohia with a 243 million pounds spike in earnings to hit No. 26 with a fortune of 5.4 billion pounds.

NRI industrialist Lord Swraj Paul logged a 500 million pounds hike in his fortune to jump up from 90th in 2018 to 69th this year, with an estimated fortune of 2 billion pounds.

There were a few new Indian-origin entries to this year’s list, including Sunil Vaswani who has interests in transport and food industries. Ranked 75, India-born Vaswani clocked a fortune of 1.9 billion pounds via his frozen food and car-making empire working alongside brothers Mahesh and Haresh.

Another new entry is Lord Dolar Popat, who runs care homes and hotels in the UK. Described as the first Tory of Gujarati descent in the House of Lords, the 65-year-old peer is credited with building up TLC Group from just 10 pounds when he arrived in the UK aged 17 after being expelled by Idi Amin’s regime in Uganda.

The list, which estimates the 1,000 richest people in the UK, is based on identifiable wealth including land, property, other assets such as art, and shares in companies. It does not include the amount contained in people’s bank accounts.

“On the face of it this looks like a bumper year for the super-rich, with record wealth, more billionaires and the entry level rising to 120 million pounds. But many of the rich are nursing big losses after a year of turbulence on the stock market and political deadlock in Westminster, writes Robert Watts, the compiler of the list.

Technology is seen as making and breaking fortunes in this year’s list, with young entrepreneurs making vast sums of money from online fashion retail, dating apps and creating YouTube videos.

The wealthiest woman in Britain is Sigrid Rausing, granddaughter of the man who invented the Tetra Pak packaging fortune. She is reportedly worth 12.2 billion pounds and ranked sixth. Zimbabwe-born Valerie Moran becomes the first black female entrepreneur ever to make the annual rich list, with a fortune of 122 million pounds from her financial technology business.