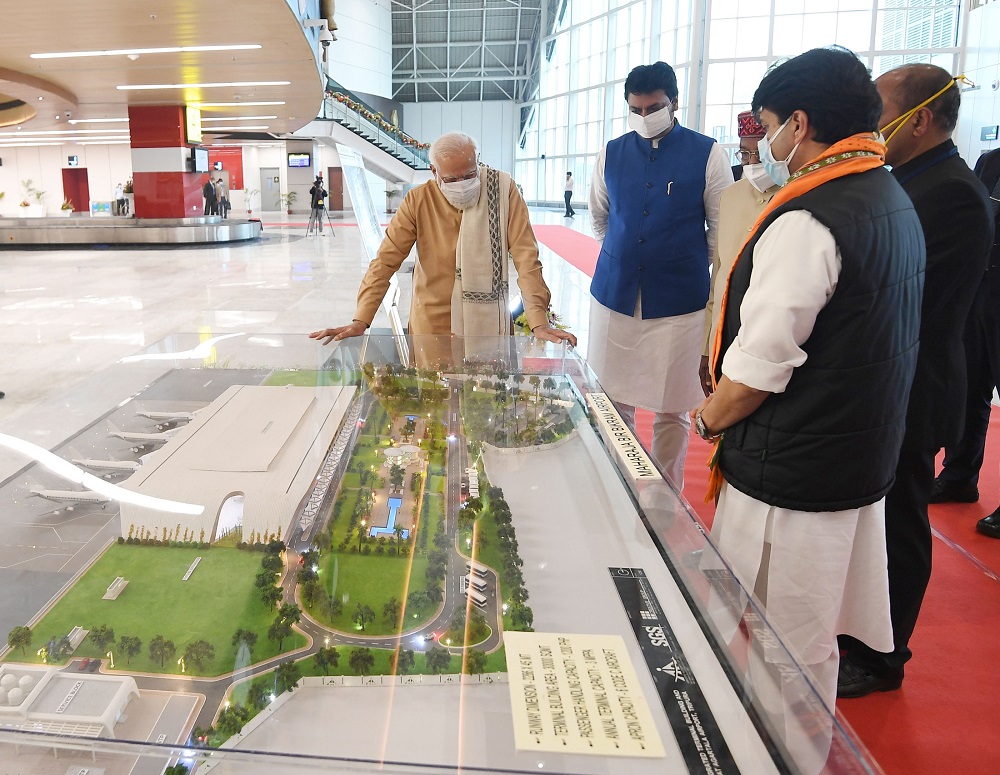 Addressing the gathering, the Prime Minister said the India of the 21st century will move forward by taking everyone along with the spirit of Sabka Saath, Sabka Vikas and Sabka Prayas. Unbalanced development where some states lag behind and people deprived of even some basic facilities is not good.

This is what the people of Tripura have seen for decades, he said. Modi recalled the times of relentless corruption and governments with no vision or intention of development of the state. After such a scenario, the Prime Minister said that the current regime came up with the Mantra of HIRA – H to Highway, I to Internet way, R to railways and A to Airways for improving the connectivity in Tripura. He added that today Tripura is strengthening and expanding its connectivity on the basis of the HIRA model.

Commenting on the new airport, the Prime Minister said that the airport is a blend of Tripura’s culture, natural beauty and modern facilities. The airport will play a big role in enhancing air connectivity in the North East. The Prime MInister pointed out that work is going on in full earnest to make Tripura the gateway to the northeast. Road, rail, air and water connectivity infrastructure is getting unprecedented investment. This is turning Tripura into a new hub of business and industry as well as a trade corridor.

Praising Tripura’s record in taking the welfare schemes to the people , the Prime Minister lauded the state for launching Mukhyamantri Tripura Gram Samriddhi Yojana which is aimed to fulfil the Prime Minister’s vision which he articulated from the ramparts of the Red Fort, of taking the schemes to people and reaching the saturation of the coverage. The scheme will promote tap water for every household, housing, Ayushman coverage, insurance cover, KCC and roads leading to enhanced confidence in the rural population. The Prime Minister appreciated the Chief Minister for working to change the definitions to improve the coverage of PMAY. This has resulted in 1.8 lakh families getting pucca houses of which 50 thousand houses have already been given for possession in the state.

The Prime Minister said the new National Education Policy is being implemented in the country to skill the youth who are making India modern in the 21st century. It also lays equal emphasis on learning in the local language. Students of Tripura are now going to get help from Mission-100 and the ‘Vidya Jyoti’ campaign, he said.

The Prime Minister said that the campaign to vaccinate the youth of the 15-18 age group will ensure that there is no break in the education of the young students. This will alleviate the worries of the students and parents. The Prime Minister informed that in Tripura, 80 percent of the population has received the first dose and 65 percent have received both the doses of vaccine. He expressed the hope that Tripura will soon achieve the target of vaccinating the 15-18 age group fully.

The Prime Minister said that Tripura can play an important role in giving the country an alternative to single-use plastic. A huge market is being created in the country for bamboo brooms, bamboo bottles products made here. With this, thousands of people are getting employment or self-employment in the manufacture of bamboo items. He also praised the state’s work in organic farming.

The New Integrated Terminal Building of Maharaja Bir Bikram Airport is built at a cost of about Rs 450 crore and is a state of art building spread over 30,000 square metres having modern facilities and supported by the latest IT network-integrated system. Project Mission 100 of Vidyajyoti Schools is aimed to improve the quality of education in the state by converting 100 existing High / Higher secondary schools to Vidyajyoti Schools with state of art facilities and quality education. The project will cover about 1.2 lakh students from Nursery to class XII and will cost around Rs 500 crores in the next three years.

Mukhyamantri Tripura Gram Samriddhi Yojana aims to achieve the benchmark standards for service delivery in core development sectors at the village level. The key sectors selected for this Yojana are household tap connections, domestic electricity connections, all-weather roads, functional toilets for every household, recommended immunization for every child, participation of women in Self Help Groups etc.