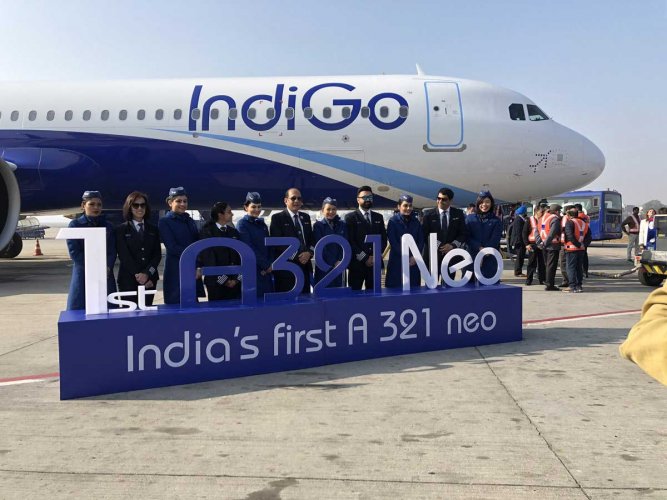 The maiden A321neo (new engine option), VT-IUA, landed at 9.06 am at Terminal-3 of the Indira Gandhi International Airport in Delhi and was accorded the traditional water canon salute on arrival, the source told PTI.

The new aircraft has joined the fleet after a delay of one month. It was to join the fleet on November 29 as per the earlier schedule, he said.

The induction of the first A321neo, of the 150 on order, will help IndiGo spread its wings to medium-haul international destinations.

Flights of up to six hours duration come under medium- long haul category of operations.

The longer range A321neo plane has been delivered to the airline at a time when it is struggling with the frequent glitches in the Pratt & Whitney engines, powering these planes, and taking these aircraft out of operations on a regular basis.

These engine-run aircraft have been facing glitches frequently since their induction in the fleet by IndiGo and GoAir in 2016, with several instances of mid-air engine shut downs.

But the US engine maker has failed to come up with any tangible solution to fix these glitches so far despite frequent grounding of these planes and passengers’ safety at risk.

The airline has already announced its plans to launch services to Istanbul and has also signed a code-share pact with the Turkish Airlines for seamless connectivity to 20 global destinations for its passengers from Istanbul and onwards.

In turn, passengers of the Turkish national carrier will have access to all destinations operated by IndiGo within India.

IndiGo at present operates over 1,300 daily flights to 52 domestic and 15 international destinations.