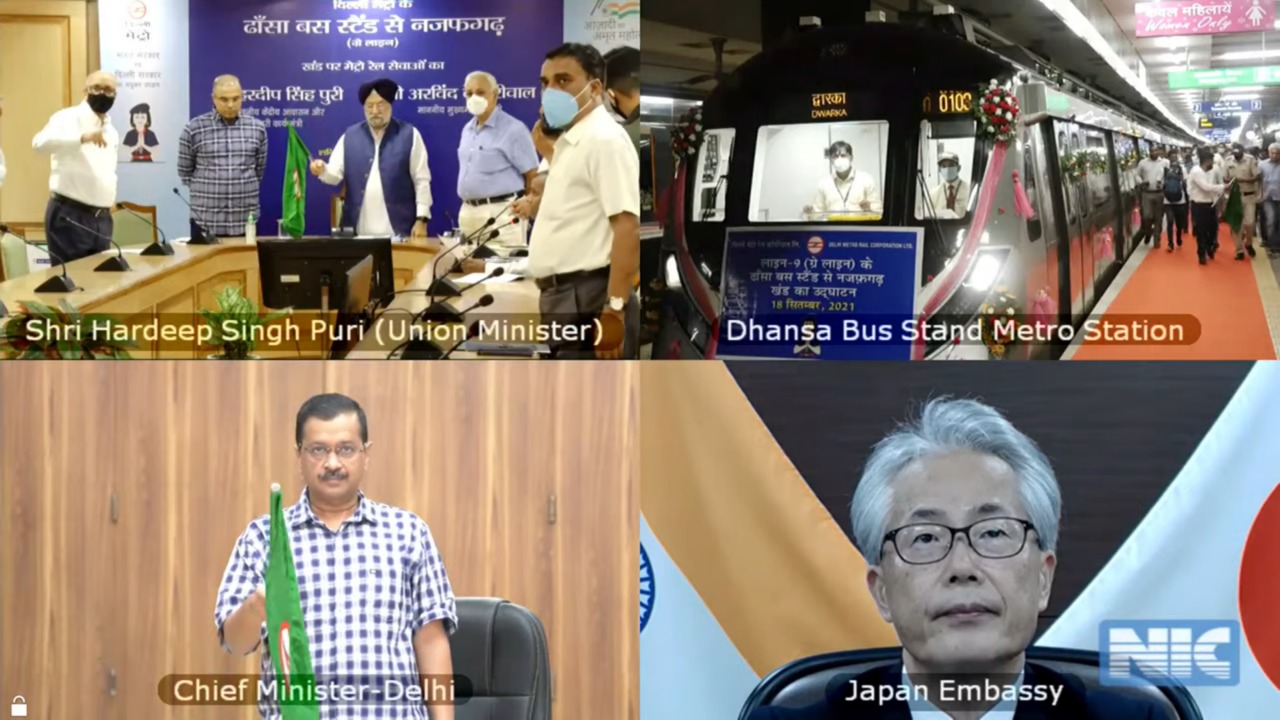 The Dhansa Bus Stand is an underground station and an extension of the presently operational Dwarka- Najafgarh Corridor.

The Dhansa Bus Stand – Najafgarh section on the Grey Line of Delhi Metro was formally inaugurated for passenger services by the Union Minister for Housing and Urban Affairs, Sh. Hardeep Singh Puri and the Chief Minister of Delhi, Sh. Arvind Kejriwal via video conferencing today. pic.twitter.com/VpqcmVBHyb

Union Minister for Housing and Urban Affairs,Puri speaking on the occasion said that the metro rail system has delivered a world class transportation system to our citizens. Delhi Metro has been a trailblazer, in that sense, with its ridership reaching 65 lakh per day during pre-Covid era, while the overall ridership in Metros across the country was 85 lakhs.

Puri said that as we gradually recover from the Covid – 19 pandemic, enhanced mobility requirements of the masses in our cities will play an important role in taking the economy forward. The connections such as the one to Dhansa will play a vital role, in reaching to rural areas also. The gap between the rural and urban parts of Delhi is now being bridged with such connections which are going deep into the interior areas of the national capital. He also called upon the Delhi Government for expediting the approvals of pending projects of Delhi Metro.

The Minister mentioned that at present around 740 kms Metro line is operational in the country and with the Metro system seeing a massive surge in its network it will be more than 900 kms by 2022. More than 1000 Kms of Metro lines is under construction in the country, and it will reach 2000 Kms target in the near future.

Puri said that the inauguration of today’s 1.2 kilometres stretch extension might be small from the point of view of network length, but from the perspective of providing enhanced connectivity to the interior parts of the national capital, this new extension is an important milestone. The Najafgarh – Dhansa Bus Stand corridor will take the Metro to many new suburban localities in the Najafgarh area of Delhi, he added.

The Minister said that Metro has changed the face of urbanization as labourers working in Delhi or in big cities now can have affordable dwellings in the outskirts or villages near the cities and can commute daily for work on Metro saving on money and time.

Secretary, Housing &Urban Affairs, Mishra addressing the event said that two vital landmarks in the Metro rail history of the nation were achieved with the operationalization of the first ever driverless Metro train and the implementation of the National Common Mobility Card facility on the Airport Express Line of the Delhi Metro. He said that with the 110 kms becoming the driverless stretch, it has become the longest driverless stretch in the world.

SPECIAL FEATURES OF THE STATION:

• The station has been designed as a four-level underground structure where there will be the platform at the bottom (at an approximate depth of 18 metres) followed by the concourse and then an entire floor for parking above it with the roof level at the top (ground level).

• Dhansa Bus Stand Metro station has the first ever underground Metro station of the Delhi Metro network to have an entire underground floor dedicated for parking of vehicles. The parking facility will be integrated with the main station area where vehicle users will be able to park their cars and two wheelers and then proceed to the concourse of the station directly using lifts and escalators.

• The parking lot is equipped with facilities such as the entry and exit ramps, lifts, staircases, escalators etc. The facility has a parking space for about 110 cars and 185 two wheelers. There would be provision for property development activities at the ground level in the future.

ARTWORK OF THE STATION :

• The areas around Dhansa Bus Stand in the Najafgarh region have deep cultural roots. The area is rich in historical content and contributes significantly in terms of ecological values as well. Jheel between Najafgarh and Dhansa is a marshy ecosystem and is an ecological heaven for a large number of perennial local wildlife and seasonal movement of migratory birds which is a delight for bird watchers in the winters. Photographs on printed glass panels at Dhansa Bus Stand station showcase the rich biodiversity of this area and are themed as “Migratory Birds”

• The surrounding villages are renowned for many ancient folklore. The villages host fairs to celebrate their historical significance. Therefore, some hand painted artworks are inspired by their rich spirit and the celebration of values and are themed as “local socio-cultural scenario”

• A hand painted artwork shows the residents coming together to honour the essence of their values and upcoming lifestyle and is themed as, “Fringes of rural-urban progression” and showcases the bridge that is built in order to connect the past and the future.

• A few artworks are also depicting scenes from the fairs, while some are just showing the spirit of celebration or a touch of local designs and motifs. The artworks will be eye catching for any passenger passing through the station and might generate interest in the place itself.

SOME OF THE SPECIAL FEATURES UNDER ATAL MISSION FOR REJUVENATION AND URBAN TRANSFORMATION (AMRUT) INDIA INITIATIVE:

• Provision of drinking water within the station premise.

• The station has been rated platinum for green building norms

• Entry 2 and 3 are connected through subway thereby, pedestrian road crossing at surface could be avoided.

• There is provision of basement parking for 2 wheelers and 4 wheelers, surface parking for Handicap and Bi-Cycle, bus bays and bays for Gramin Sewa & dropoff zones which are connected to station entrances through pedestrian footpath.