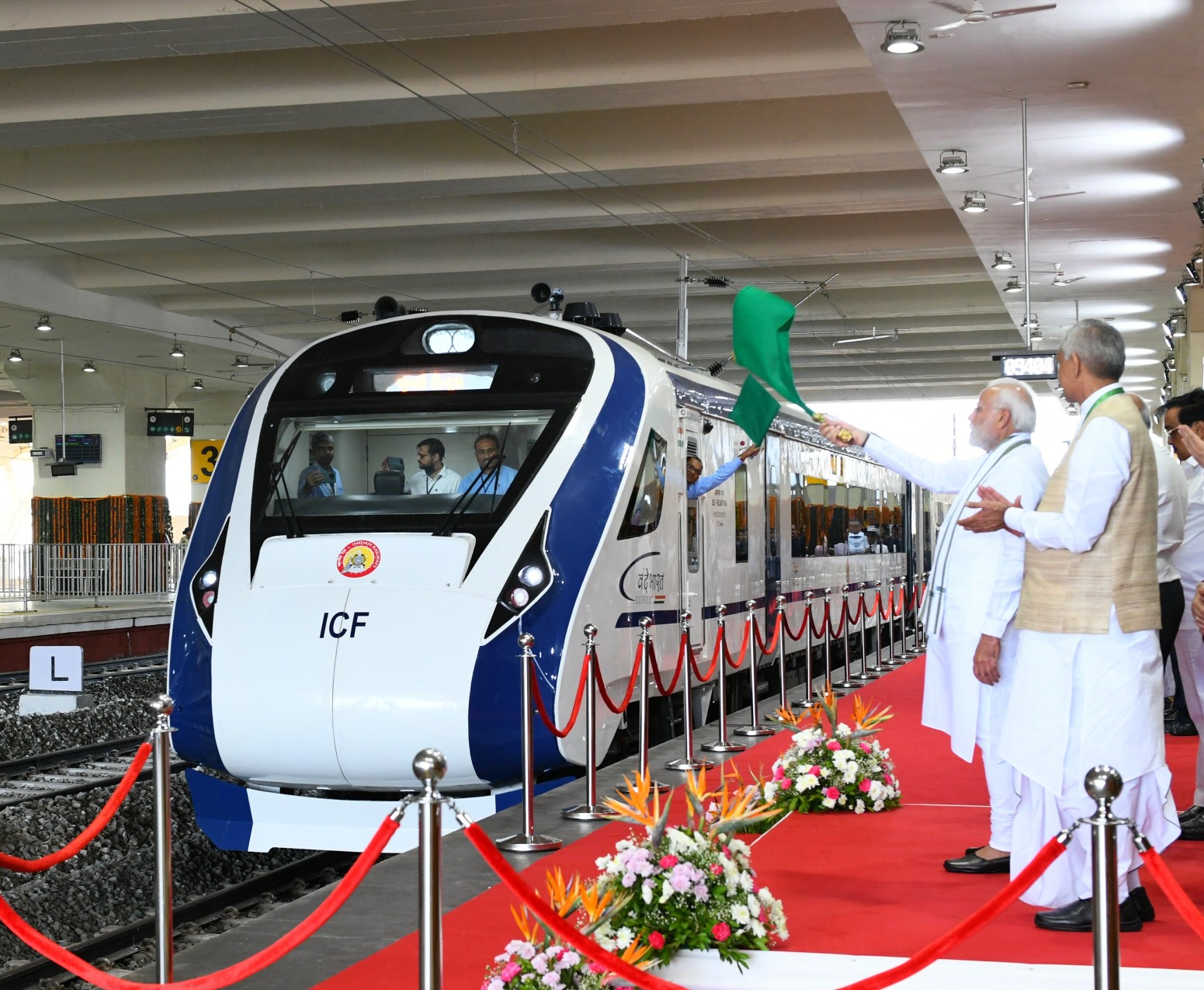 NEW DELHI: The Prime Minister, Shri Narendra Modi flagged off Gandhinagar- Mumbai Vande Bharat Express at Gandhinagar station and travelled on the train from there to Kalupur Railway Station.

At Kalupur Station my Vande Bharat journey ended and my journey on board the Ahmedabad Metro began. In no time, I was headed towards Thaltej, where an exceptional programme was held. Ahmedabad will love their Metro, which will boost connectivity and comfort. pic.twitter.com/M4FNSHeSW8

The Prime Minister then flagged off the new & upgraded version of Vande Bharat Express between Gandhinagar and Mumbai and travelled on the train from there to Kalupur Railway Station. The Prime Minister also interacted with his co-passengers including those from the family members of Railways staff, women entrepreneurs and researchers and youngsters. He also interacted with workers, engineers and other staff who toiled to make Vande Bharat trains a shining success.

Vande Bharat Express 2.0 between Gandhinagar and Mumbai is going to be a game changer and will boost connectivity between the two business hubs of India. It will enable business owners from Gujarat to travel to Mumbai and vice versa without bearing the brunt of high-cost airline tickets while availing facilities that are available on air. One-way travel time of Vande Bharat Express 2.0 from Gandhinagar to Mumbai is estimated at around five and a half hours.

The Vande Bharat Express 2.0 offers a myriad of superior and aircraft-like travelling experiences. It is equipped with advanced state-of-the-art safety features including an indigenously developed Train Collision Avoidance System – KAVACH.

Vande Bharat 2.0 will be equipped with more advancements and improved features such as reaching the speed of 0 to 100 kilometres per hour in just 52 seconds, and a maximum speed up to 180 kilometres per hour. The improved Vande Bharat Express will weigh 392 tons when compared to the previous version of 430 tons. It will also have a Wi-Fi content on-demand facility. Every coach is equipped with 32” screens providing passenger information and infotainment compared to 24” in the previous version. Vande Bharat Express is also going to be environment friendly as the ACs will be 15 per cent more energy efficient. With dust-free clean air cooling of the traction motor, the travel will become more comfortable. Side recliner seat facility which was provided only to Executive Class passengers earlier will now be made available for all classes. Executive Coaches have the added feature of 180-degree rotating seats

In the new design of Vande Bharat Express, a photo-catalytic ultraviolet air purification system is installed in the Roof-Mounted Package Unit (RMPU) for air purification. As recommended by Central Scientific Instruments Organisation (CSIO), Chandigarh, this system is designed and installed on both ends of RMPU to filter and clean the air free from germs, bacteria, viruses etc. coming through fresh air and return air.