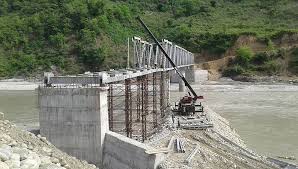 NEW DELHI: The government of India has sanctioned over Rs 600 crore for the construction of 42 roads and bridges in Uttarakhand, Chief Minister Pushkar Singh Dhami said on Friday.

Giving the information at a press conference here, Dhami said the Ministry of Road Transport and Highways has sanctioned Rs 615.48 crore out of the Central Road and Infrastructure Fund (CRIF) for the construction of 42 roads and bridges in the state as a result of the state government’s efforts.

Dhami said unprecedented work has been done during the last seven years of Prime Minister Narendra Modi’s leadership for the development of Uttarakhand.

Road and rail link projects taken up in the state over the past few years are big indicators of it, he said.

Construction of roads and flyovers on way to Haridwar and Rishikesh have reduced the travel time from Dehradun to these towns to just around 45 minutes to one hour, he said. Earlier, it took more than two hours to reach these places from Dehradun, he said.

The distance to Delhi will also be drastically reduced once the elevated road from Dat Kali temple in Dehradun to Delhi is built, the Chief Minister said.

Thanking Union Road Transport and Highways Minister Nitin Gadkari for sanctioning the amount, Dhami said it will speed up construction of roads and bridges from which the state would benefit immensely.

Apart from this, other proposals worth Rs 32,000 crore are also pending before the Centre which include the Rs 12,000 crore Dehradun-Delhi elevated road, he said.

“I will soon request the Prime Minister and the road transport and highways minister for clearance of the projects whose foundation stones are to be laid this year,” Dhami said.