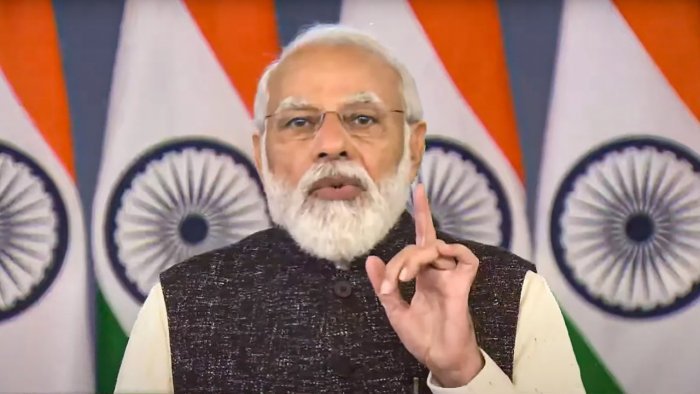 New Delhi: Prime Minister Narendra Modi on Saturday released Rs 20,946 crore to 10.09 crore farmers across India as the 10th installment of financial aid under the PM-KISAN scheme and said there was a need for innovation in agriculture along with the promotion of natural farming.

Under the Pradhan Mantri Kisan Samman Nidhi (PM-KISAN) scheme, a financial benefit of Rs 6,000 per year is provided to the eligible farmer families, payable in three equal installments of Rs 2,000. The PM-KISAN scheme was announced in the February 2019 Budget. The first installment was for the period December 2018 to March 2019.

Addressing a virtual event for the release of the amount, Modi said that the scheme is a big support for farmers and the Centre has transferred all installments on time directly into bank accounts of beneficiaries, without any involvement of middlemen.

Nobody would have thought that India could achieve such a feat, he said.

”If we include today’s transfer, more than Rs 1.8 lakh crore has been transferred directly to the accounts of the farmers under the PM-KISAN,” he said, adding that the scheme has helped farmers in buying good quality seeds and fertilizers.

On the occasion, Union Agriculture Minister Narendra Singh Tomar said around Rs 20,900 crore is being transferred to about 10.09 crore beneficiaries.

The event was attended by as many as nine chief ministers, several ministers from different states, and representatives of agricultural institutions.

He said small farmers are feeling the power of collective strength with setting up of FPOs as he listed out five benefits of FPOs for small farmers — increased bargaining power, scale, innovation, risk management and adaptability to the market conditions.

Through FPOs, farmers are now able to buy inputs wholesale and sell their agri produce at retail.

The government is promoting FPOs at every level and they are getting help of up to Rs 15 lakh. As a result, organic FPOs, oilseed FPOs, bamboo clusters and Honey FPOs are coming up.

”Today, our farmers are benefitting from the schemes like ‘One District One Products’ and markets, both nation and global, are opening for them,” Modi said.

Pointing out that the country is still importing many commodities which Indian farmers can easily fulfil, Modi said edible oil is one such example and a lot of foreign exchange gets invested for that.

Modi highlighted that the National Palm Oil Mission has been launched with a budget of Rs 11,000 crore aimed at reducing imports of cooking oils.

Talking about achievements in the agriculture sector in recent years, he said the foodgrains production has touched 300 million tonnes despite the pandemic.

The Prime Minister said the government has also achieved record procurement of foodgrains at minimum support price (MSP). About 60 lakh hectare of land has been brought under micro-irrigation.

Over Rs 1 lakh crore was given in compensation under the crop insurance scheme, whereas the premium received was just Rs 21,000 crore, he said.

About Gobardhan Scheme to promote biogas, he said if there will be value in cow dung, the non milching animals will not be a burden on farmers.

The government has established the Kaamdhenu Commission and is strengthening the dairy sector infrastructure.

The Prime Minister emphasized on promotion of natural farming in a big way. He said that chemical-free farming is a major way of protecting the health of the soil.

Natural farming is a key step in this direction, he said and asked for making every farmer aware of the processes and benefits of natural farming.

He said there is a huge demand for chemical-free farm produce and the cost of production is also less.

The Prime Minister called upon the farmers to keep on doing innovation in farming. ”We should not hesitate in adopting new crops and new ways in agriculture.” He also asked farmers to strengthen the movement of cleanliness.

During the event, the Prime Minister interacted with FPOs of Uttar Pradesh, Rajasthan, Punjab, Gujarat, Tamil Nadu and Uttarakhand.

Interacting with FPOs from Uttarakhand, the Prime Minister enquired about the choice of organic farming by them and the ways of certification of the organic products.

The Prime Minister said that it has been the efforts of the government that natural and organic farming is widely promoted as it reduces the reliance on chemical fertilizer and improves the income of the farmers.

An FPO from Punjab informed him about the ways of disposing of the Parali (crop residues) without burning. Modi stressed that their experience of Parali management should be emulated everywhere.

An FPO from Rajasthan talked about honey production, while FPO from Uttar Pradesh shared how it helps members with seeds and organic fertilizers. An FPO from Tamil Nadu said it is fully owned and operated by women. FPO from Gujarat talked about natural farming and how cow-based farming can lower expenses and stress on the soil.