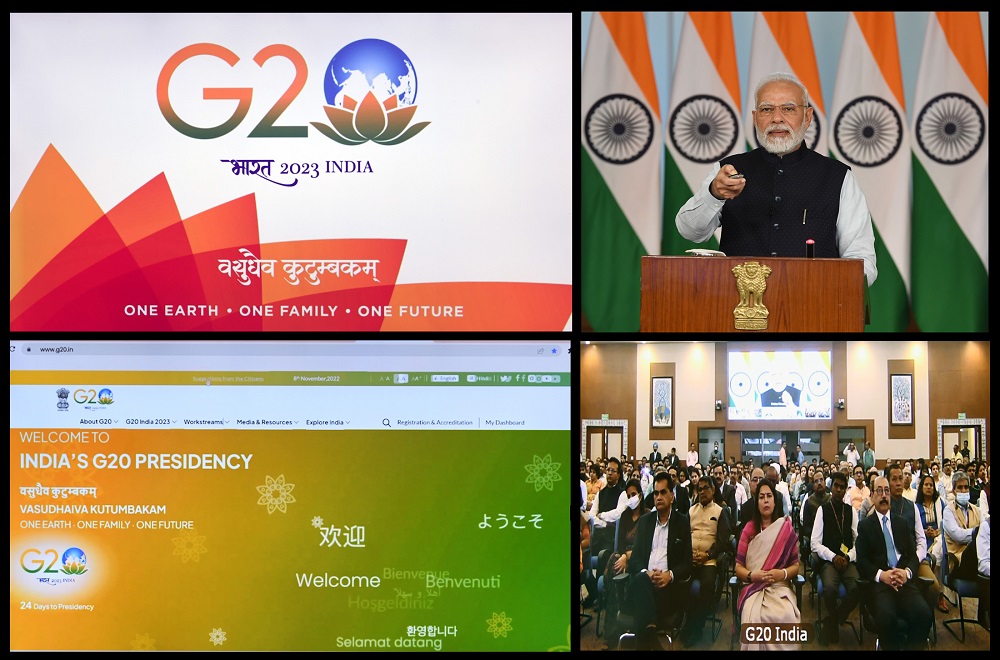 NEW DELHI: The Prime Minister, Narendra Modi unveiled the logo, theme and website of India’s G-20 Presidency via video conferencing today. Addressing the gathering, the Prime Minister remarked that from 1st December 2022, India will preside over the G-20 Summit and said that it is a historic opportunity for the country.

India will assuming the G20 Presidency this year. Sharing my remarks at the launch of G20 website, theme and logo. https://t.co/mqJF4JkgMK

The lotus in the logo symbolises India’s ancient heritage, faith and thought. The Philosophy of Adwait, the Prime Minister said, emphasises the oneness of all creatures and this philosophy will be a medium of resolution of today’s conflicts. This logo and theme represent many key messages from India. “Message of Buddha for freedom from war, Mahatma Gandhi’s solutions in the face of violence, through G-20, India is giving them a new height”, he said.

The Prime Minister remarked that India’s G-20 presidency is coming at a time of crisis and chaos. He underlined that the world is dealing with the aftereffects of a disruptive once-in-a-century global pandemic, conflicts and lots of economic uncertainty. “The lotus in the logo of G-20 is a symbol of hope in such tough times,” he said. The Prime Minister remarked that even if the world is in a deep crisis, we can still progress to make it a better place. Throwing light on the culture of India, the Prime Minister mentioned that both the Goddesses of knowledge and prosperity are seated on a lotus.

The Prime Minister pointed out the earth that is placed on a lotus in the logo of G-20 and said that shared knowledge helps us in overcoming difficult circumstances while shared prosperity enables us to reach the last mile. He further explained the significance of the seven petals of the lotus which represent the seven continents and seven universal musical notes. He added, “When the seven musical notes come together, they create perfect harmony.” Shri Modi said that the G-20 aims to bring the world together in harmony while respecting diversity.

The Prime Minister said that this summit is not merely a diplomatic meeting. India takes it as a new responsibility and as the world’s trust in it. “Today, there is an unprecedented curiosity in the world to know and understand India. Today India is being studied in a new light. Our current successes are being assessed and unprecedented hopes are being expressed about our future”, he continued, “In such an atmosphere it is the responsibility of the citizens to go beyond these expectations and acquaint the world with India’s capabilities, philosophy, social and intellectual strength.” “We have to unite everyone and energise them for their responsibility towards the world”, he added.

Modi said there is a journey of thousands of years for India to reach this stage today. “We have seen highs of prosperity and also the darkest phase in global history. India has reached here along with the history of many invaders and their tyranny. Those experiences are the biggest strength in India’s development journey today. After independence we started a big journey starting from zero, aiming for the top. This includes the efforts of all the governments in the last 75 years. All the governments and citizens together in their own way tried to take India forward. We have to move forward with this spirit today with a new energy taking the whole world along”, he said.

The Prime Minister underlined a key lesson of India’s culture “When we strive for our progress, we also envision global progress”, he said. He also dwelled on the democratic heritage of Indian civilization. He pointed out “India is such a rich and living democracy of the world. We have the values and a proud tradition in the form of the mother of democracy. India has as much uniqueness as it has diversity. “Democracy, diversity, indigenous approach, inclusive thinking, local lifestyle and global thoughts, today the world is seeing solutions to all its challenges in these ideas”, he said.

Apart from Democracy, the Prime Minister also put forward India’s efforts in the field of sustainable development. “We have to make sustainable development a part of individual LiFE rather than just a system of governments. The environment is a global cause for us as well as personal responsibility”, the Prime Minister emphasised. He also highlighted the contribution of Ayurveda and noted global enthusiasm for Yoga and coarse grains.

The Prime Minister said that many of India’s achievements can be used by other countries of the world. The use of digital technology in development, inclusion, removal of corruption, improving ease of doing business and ease of living, can be templates for many countries. The Prime Minister also highlighted India’s women empowerment and women-led development and financial inclusion through the Jan Dhan Account which will reach the world through the opportunity of the G-20 presidency.

The Prime Minister pointed out that the world is looking with hope towards collective leadership whether it is G7, G77 or UNGA. In such a situation India’s presidency of G20 assumes a new significance. He elaborated that India maintains close relations with developed countries on the one hand, and at the same time understands and expresses the views of developing countries very well. “It is on this basis that we will build the blueprint of our G-20 Presidency together with all the friends of the ‘Global South’ who have been India’s co-travellers on the path of development for decades” he added.

The Prime Minister highlighted India’s endeavour that there should be no first world or third world in the world, but only one world. Furthering India’s vision and the common objective of bringing the whole world together for a better future, the Prime Minister gave examples of One Sun, One World, One Grid which has been India’s clarion call for a revolution in the world of renewable energy, and the global health campaign of One Earth, One Health. He further added that the G-20 mantra is – One Earth, One Family, One Future. “It is these thoughts and values ​​of India that pave the way for the welfare of the world”, he continued, “I am sure, this event will not only be a memorable one for India, but the future will also assess it as a momentous occasion in the history of the world.”

Pointing out that G-20 is not solely an event of the central government, the Prime Minister requested the state governments as well as all the political parties to actively take part in this endeavour. He said that the event is organised by Indians and the G-20 is a great opportunity for us to showcase a glimpse of our tradition of ‘Guest is God’. He informed that the events related to G-20 will not be limited to Delhi or a few places but programmes will be held in every corner of the country. “Each of our states has its own characteristics, heritage, culture, beauty, aura and hospitality”, Shri Modi remarked.

The Prime Minister gave examples of the hospitality of Rajasthan, Gujarat, Kerala Madhya Pradesh, West Bengal, Tamil Nadu, Uttar Pradesh, Himachal Pradesh and Uttarakhand and remarked that it is this hospitality and diversity that amazes the world.

The Prime Minister informed that he will be heading to Indonesia next week for the formal announcement of India’s G-20 Presidency and urged all the states and state governments of India, to further their roles in this regard as much as possible. “All the citizens and intellectuals of the country should also come forward to be a part of this event,” he added. He also urged one and all to send their suggestions and express their views on the newly launched G-20 website about how India can maximise its role in the welfare of the world. “It will give new heights to the success of an event like G-20,” he concluded, “I am sure, this event will not only be a memorable one for India, but the future will also assess it as a momentous occasion in the history of the world.”

Guided by the Prime Minister’s vision, India’s foreign policy has been evolving to undertake leadership roles on the global stage. In a significant step in this direction, India will assume G-20 Presidency on 1st December 2022. The G-20 Presidency offers a unique opportunity for India to contribute to the global agenda on pressing issues of international importance. The logo, theme and website of our G-20 Presidency would reflect India’s message and overarching priorities to the world.

G-20 is the premier forum for international economic cooperation representing around 85% of the global GDP, over 75% of the worldwide trade, and about two-thirds of the world population. During the G-20 Presidency, India will hold about 200 meetings in 32 different sectors in multiple locations across India. The G-20 Summit to be held next year would be one of the highest-profile international gatherings to be hosted by India.