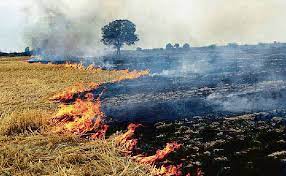 CHANDIGARH: Farm fire incidents crossed the 30,000 mark in Punjab with the state witnessing 2,487 stubble-burning cases on Monday. With fresh crop residue burning incidents, the cumulative farm fire cases from September 15 to November 7, rose to 32,486, according to the Ludhiana-based Punjab Remote Sensing Centre data.

Currently, the districts in the Malwa region are reporting a rising number of stubble-burning incidents.

Haryana’s Faridabad reported its air quality index at 337, according to the Central Pollution Control Board (CPCB) data.

Union Territory Chandigarh, the joint capital of Punjab and Haryana, reported its air quality at 175.

Paddy straw burning in Punjab and Haryana is one of the reasons behind the alarming spike in air pollution levels in the national capital in October and November.

As the window for Rabi crop wheat is very short after paddy harvest, farmers set their fields on fire to quickly clear off the crop residue. Punjab generates around 180 lakh tonnes of paddy straw annually.