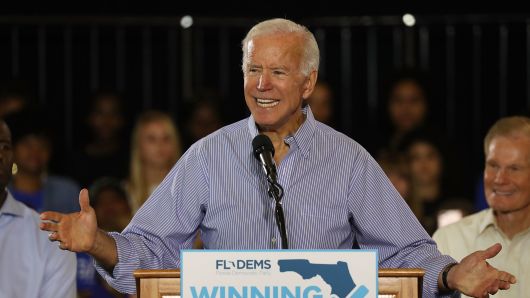 PITTSBURGH: Former US vice president Joe Biden, the newest Democratic presidential candidate, will hit the campaign trail in earnest on Monday with a rally before union members who have been a mainstay of his and the party’s support.

For his first public event since announcing his candidacy last Thursday, Biden chose Pennsylvania, the state where he was born 76 years ago — and more specifically Pittsburgh, a blue-collar city now remaking itself as a tech hub.

Perhaps best-known as former president Barack Obama’s two-term deputy, Biden has set himself apart from most of the sprawling Democratic field by opting for a strategy of full-on confrontation with President Donald Trump.

Whether that approach appeals to voters — or if they prefer other Democrats’ focus on issues like healthcare, the environment and infrastructure — will become clear in coming months.

But Biden, with name recognition earned not just with Obama but in his 36 years representing the state of Delaware in the Senate, starts out with a leg up over other Democrats.

A Washington Post/ABC poll on Sunday put him in the lead among Democrats, with 17 percent support, to 11 percent for Senator Bernie Sanders and five percent for South Bend, Indiana Mayor Pete Buttigieg.

Pennsylvania voted for Trump in 2016 — after favoring Obama in the two previous elections — making it one of the key industrial states where a sense of social and economic decline and alienation seemed to play into Trump’s hands.

But Biden has long been a favorite of blue-collar voters, and he prides himself on staying close to the Democrats’ working-class supporters.

“Wall Street bankers and CEOs did not build the United States,” he said in a recent appearance in Massachusetts in front of striking supermarket workers. “You built the United States… ordinary people of the middle class built this country.” In Pittsburgh, Biden will be addressing a union group about his ideas for rebuilding the American middle class.

The announcement of his candidacy drew rapid fire from Trump, who immediately conferred on him the dismissive title of “Sleepy Joe.” It also may have sparked the insistence last week by the 72-year-old president that he is a “young, vibrant man” — presumably contrasting himself with Biden, who has visibly aged since leaving the White House and will need reserves of energy during the long campaign ahead.

With several young Democrats seeking the nomination — the youngest is 37-year-old Buttigieg — Biden’s age seems certain to become an issue. However, one top rival, Bernie Sanders, is also no spring chicken at 77 years old.

And with many of his Democratic rivals taking left-leaning positions on issues from the environment to reparations for the descendants of slaves, Biden’s decidedly centrist and moderate approach could make him an outlier.

“Here’s the problem for Joe,” Republican Senator Lindsey Graham said Sunday on CBS: “Does he fit into the Democratic Party of 2020? I don’t know.” For now, Biden can take comfort not only in the polls, which made him a frontrunner even before he declared his candidacy, but also in his fund-raising success.

He raised USD 6.3 million in the 24 hours after his announcement, the highest figure for any Democrat so far.

Biden has another problem, however — the accusations, dating back years, that he has been a little too “touchy-feely” around women on the campaign trail and at public events.

He has insisted that he never “intended” to make anyone uncomfortable and has promised to do better in future.