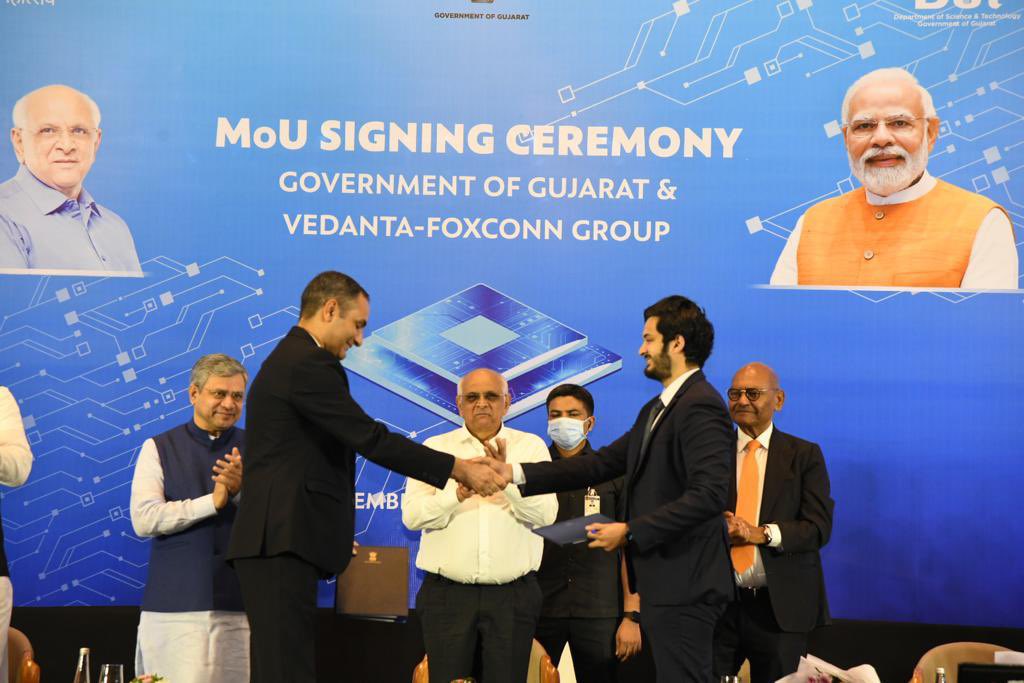 AHMEDABAD: A joint venture of the Indian conglomerate Vedanta and Taiwanese electronics manufacturing giant Foxconn signed a Memorandum of Understanding with the Gujarat government on Tuesday to set up a semiconductor and display manufacturing unit in the state.

Vedanta-Foxconn would invest Rs 1,54,000 crore to set up the facility in Gujarat, which would create one lakh job opportunities, Chief Minister Bhupendra Patel said after the MoU was signed in the presence of Union Minister for Railways, Communications, Electronics & Information Technology, Ashwini Vaishnaw, at a function in Gandhinagar.

This is the biggest ever corporate investment in the history of independent India, said Gujarat Science and Technology Department Secretary Vijay Nehra, who signed the MoU on behalf of the state government.

Prime Minister Narendra Modi in a tweet said this MoU is an important step in accelerating India’s semiconductor manufacturing ambition.

“This MoU is an important step accelerating India’s semi-conductor manufacturing ambitions. The investment of Rs 1.54 lakh crore will create a significant impact to boost economy and jobs. This will also create a huge ecosystem for ancillary industries and help our MSMEs,” Modi tweeted.

Semiconductor chips, used in cars, mobile phones and other electronics devices, are not manufactured in India at present.

“Eight percent of all the chips used in the world are manufactured in Taiwan, followed by China and Japan. This upcoming facility will mark the beginning of chip manufacturing in India. This is also strategically important for India because it will reduce our dependence on other countries,” Nehra told PTI.

At present, the joint venture company is evaluating various sites in Gujarat to set up the plant and will finalise the location over the next couple of weeks, he said.

As per the MoUs signed by both the parties, the Gujarat government will facilitate the investor in obtaining necessary permissions and clearances from the state departments concerned.

“The Gujarat government will also extend fiscal and non-fiscal incentives and benefits as outlined under the Gujarat Semiconductor Policy-2022. Gujarat is the only state to have such a policy exclusively for the semiconductor industry,” Nehra said.

The Centre would also provide incentives for the project under its India Semiconductor Mission, he said, adding that the plant would commence production in the next two years.

Gujarat CM Patel assured his government will provide cooperation to the investing entity in setting up the facility and make it a success.

“When Prime Minister Modi launched the Digital India (initiative) nearly seven years back, we used to wonder where this journey would take us in future, because the PM’s thought process was completely different,” he said.

The journey started with initiatives like Startup India and Make In India, said Vaishnaw.

Today, India has 70,000 startups, including 100 unicorns, said the minister, adding that India has become the second largest mobile phone manufacturer in the world.

“Under the PM’s leadership, we created such an ecosystem which has created 25 lakh jobs in the electronics sector alone,” he said.

“Now the PM has given a target of taking the number from 25 lakh to one crore. To do that, we are working on taking electronics production from the present USD 80 billion to USD 300 billion, which roughly comes to Rs 25,00,000 crore,” Vaishnaw said.