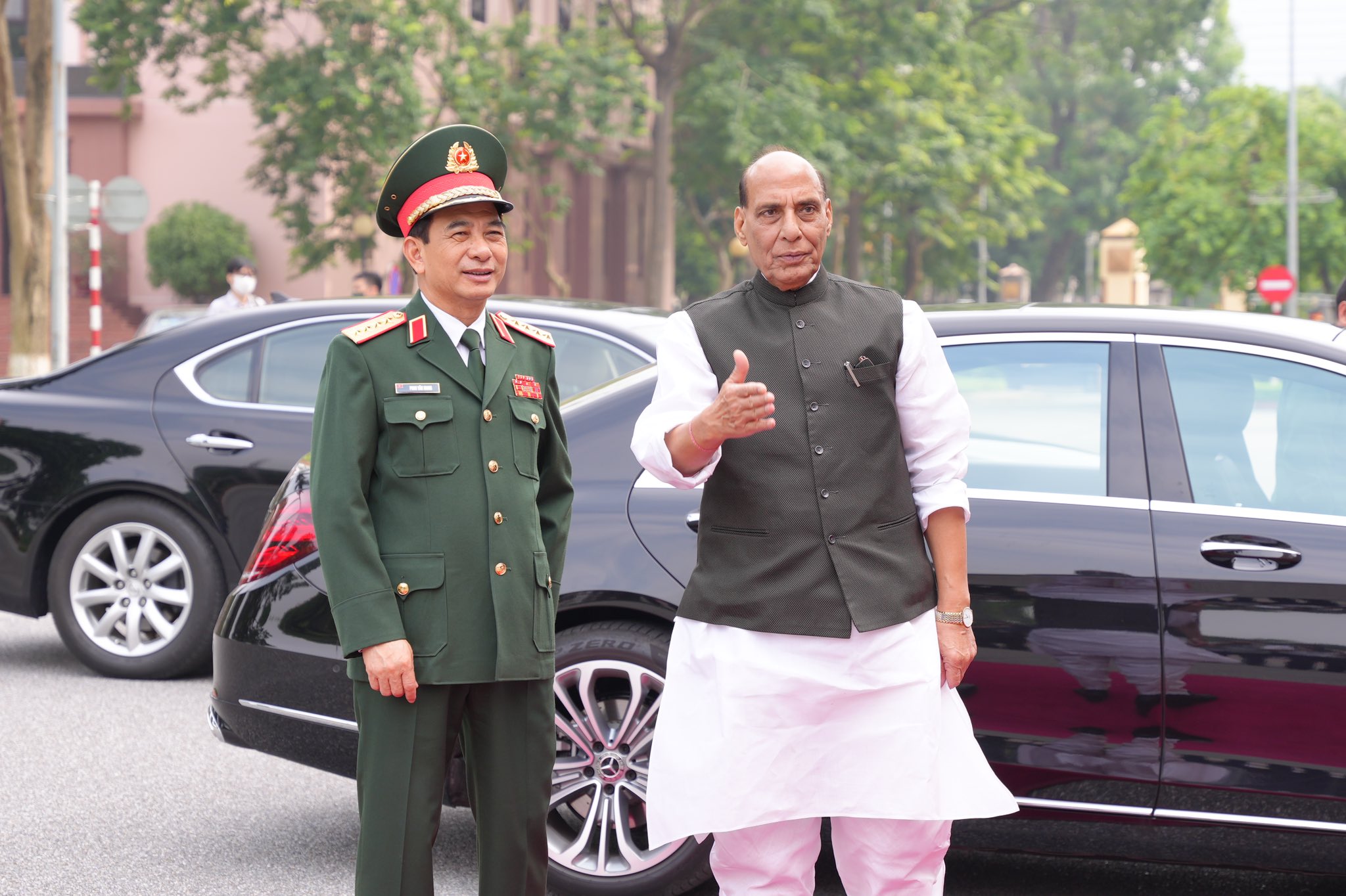 Singh, who is in the key Southeast Asian country on a three-day visit from June 8, received a guard of honour at the headquarters of the Ministry of National Defence of Vietnam. Singh was also accorded a grand welcome by General Giang.

Had an excellent meeting with General Phan Van Giang, the Defence Minister of Vietnam. We renewed interactions on expanding bilateral cooperation. Our close Defence and Security cooperation is an important factor of stability in the Indo-Pacific region. pic.twitter.com/lI0RCDHZbU

Wide-ranging discussions on effective and practical initiatives to further expand bilateral defence engagements and regional and global issues were held between the two sides, the Ministry of Defence said in a statement.

The two defence ministers also signed the Joint Vision Statement on India-Vietnam Defence Partnership towards 2030′, which will significantly enhance the scope and scale of existing defence cooperation, at a time when

China is flexing its muscles in the strategic Indo-Pacific region.

The Memorandum of Understanding (MoU) on Mutual Logistics Support was inked in the presence of both the ministers, the release said.

“In these times of increasing cooperative engagements between the defence forces of the two countries, this is a major step towards simplifying procedures for mutually beneficial logistic support and is the first such major agreement which Vietnam has signed with any country,” it said.

Both ministers also agreed on the early finalisation of the USD 500-million Defence Line of Credit extended to Vietnam.

The implementation of the projects will add substantially to Vietnam’s defence capabilities and further Prime Minister Narendra Modi’s vision of Make in India, Make for the World’, according to the statement.

Singh also announced gifting two simulators and a monetary grant towards the setting up of a Language and IT Lab at Air Force Officers Training School for capacity building of the Vietnamese Armed Forces.

We renewed interactions on expanding bilateral cooperation. Our close Defence and Security cooperation is an important factor of stability in the Indo-Pacific region, Singh said on Twitter.

We had wide-ranging discussions on effective and practical initiatives to further expand bilateral Defence engagements and regional and global issues, he tweeted.

After our fruitful deliberations, we signed the Joint Vision Statement on India-Vietnam Defence Partnership towards 2030, which will significantly enhance the scope and scale of our defence cooperation, Singh said in another tweet.

Earlier, the defence minister began his official visit by paying respects to the late President and Vietnam’s Founding Father Ho Chi Minh at his Mausoleum in Hanoi.

He also visited Tran Quoc Pagoda, a revered Buddhist temple which reaffirmed the age-old civilisational and people-to-people linkages between the two countries.

India and Vietnam have shared a Comprehensive Strategic Partnership since 2016 and defence cooperation is a key pillar of this partnership.

Vietnam is an important partner in India’s Act East policy and the Indo-Pacific vision.

Both countries share a rich history of civilisational and cultural linkages spanning over 2,000 years.

India and Vietnam continue to have the most trustworthy relations in contemporary times with broader convergence of interests and common concerns.

Bilateral defence engagements have expanded over a period of time to include wide-ranging contacts between the two countries, including Defence Policy Dialogues, military-to-military exchanges, high-level visits, capacity building and training programmes, cooperation in UN peacekeeping, ship visits and bilateral exercises.

In New Delhi, the defence ministry said Singh’s visit to Vietnam is aimed at further consolidating the bilateral defence ties as well as the comprehensive strategic partnership.

Vietnam, an important country of the ASEAN (Association of Southeast Asian Nations), has territorial disputes with China in the strategic South China Sea region.

India, the US and several other world powers have been talking about the need to ensure a free, open and thriving Indo-Pacific in the backdrop of China’s aggressive military manoeuvring in the region.

China also claims nearly all of the disputed South China Sea, though Taiwan, the Philippines, Brunei, Malaysia and Vietnam all claim parts of it. Beijing has built artificial islands and military installations in the South China Sea.

India has oil exploration projects in the Vietnamese waters in the South China Sea. India and Vietnam are boosting their maritime security cooperation in the last few years to protect common interests.

“The defence minister’s visit on the historic occasion of 50 years of establishment of India-Vietnam diplomatic relations and 75 years of India’s Independence will further consolidate the bilateral defence cooperation and the comprehensive strategic partnership,” the ministry said.

The relations between the two countries were elevated to the level of a “strategic partnership” during the visit of Vietnam’s then prime minister Nguyen Tan Dung to India in July 2007.

In 2016, during Prime Minister Modi’s visit to Vietnam, the bilateral relations were further elevated to a “comprehensive strategic partnership”.

Vietnam has become an important partner in India’s Act East policy and the Indo-Pacific vision.

Recently, Saurabh Kumar, Secretary (East) in the Ministry of External Affairs, visited Vietnam for the 12th round of political consultations and the ninth round of strategic dialogue in Hanoi.