Narendra Modi government will take necessary steps for benefit of Jammu and Kashmir: Ram Madhav on Article 35A 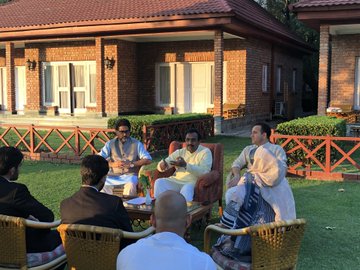 Narendra Modi government will take necessary steps for benefit of Jammu and Kashmir: Ram Madhav on Article 35A

NEW DELHI: Evading direct response to a question on whether the government of India had any plans to revoke the constitutional provisions giving special status to Jammu and Kashmir, BJP general secretary Ram Madhav said on Wednesday the Narendra Modi government would take necessary steps for the benefit of the state at an appropriate time.

“The BJP’s stand on it (repeal of Article 35A of the Constitution) is very clear but it is not the party which is going to decide (on the matter). The decision will be taken by the prime minister and his government, but I can assure you that whatever decision they will take, will be in the interest of the state,” Madhav told reporters here.

He said the state’s political parties were creating an atmosphere of fear in Kashmir by linking the movement of central armed paramilitary forces with other issues to save their political turf.

“Leaders of local regional parties are creating fear psychosis for their political interests. Moving forces in and out of Kashmir as per the requirement of the security grid is an ongoing process. Extra forces are brought in for Amarnath Yatra or elections, like there is going to be block level elections for panchayat. But linking the movement of forces with other issues is being done for personal interests,” he said.

Article 35A of the Constitution gives powers to the state to define the state’s permanent residents.

Hitting out at PDP president Mehbooba Mufti, the BJP leader said she was trying to save her “slipping political base” by resorting to provocative statements.

“There is an attempt to create an atmosphere of fear to save the slipping political base of regional parties. We are going ahead with our work in the state, elections are coming…let them go to the people and talk about elections. Their own leaders are not participating in their party’s Foundation Day…then they talk about bombs and explosives. As the noose around corruption has been tightened, they are doing this drama to save themselves,” he said.

Mehbooba, while reacting to speculations that the Centre might repeal Article 35-A, had on July 28 said tinkering with the provision of the Constitution providing special residency and job rights to natives of Jammu and Kashmir would be akin to burning hands with explosives.

Madhav said the government would take all steps which are within the legal framework and for the benefit of the people of the state.

“There are some issues pending before the courts, they will taken up there”.

He said every time there were questions about the special provisions regarding Jammu and Kashmir being scrapped, “we ask who is saying this?”

“They say Mehbooba Ji. But Mehbooba ji does not run the government. Those who have to take the steps will take them and whatever steps are taken will benefit Jammu and Kashmir. The language used by Mehbooba is an attempt to keep herself relevant,” he added.

The BJP leader said the Modi government is committed to the development of all sections of the society and the passage of the Triple Talaq Bill in Parliament was part of this agenda.

“An important step in this direction was the passage of the Triple Talaq Bill in Parliament. Just like banning child marriage in Hindu code, this bill is an major step for empowerment of Muslim women,” he said.

In a backhanded compliment to the PDP, whose two Rajya Sabha members abstained from voting on the Bill, Madhav thanked them.

“Some people directly supported the Bill and some people abstained from voting. We thank them for their support. They can support us by remaining absent,” he added.

The Modi Government on Tuesday secured Rajya Sabha’s clearance for the Muslim Women (Protection of Rights on Marriage) Bill that makes instant triple talaq among Muslims a criminal offence.

Asked about Assembly elections in Jammu and Kashmir, he said his party’s demand to the Election Commission is to hold the polls as soon as possible.

“When will elections be held in the state? Only the Election Commission can answer this question. However, our party has started preparations for the elections and our demand is that elections should be held as soon as possible,” he added.