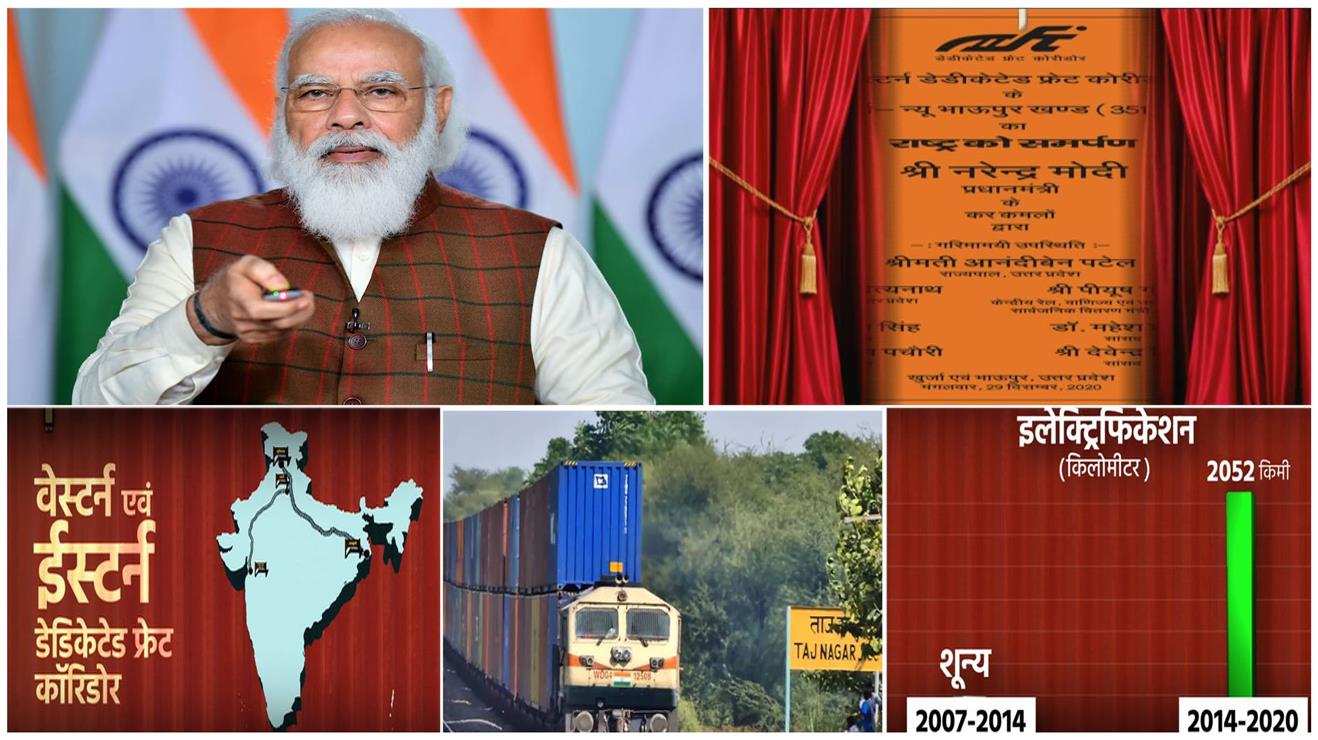 Speaking on the occasion, Modi said, “After Independence we are witnessing the inauguration of the most advanced rail section in the country. The first goods train that will run on the New Bhaupur-Khurja section will give a message of the new ‘Aatmanirbhar Bharat’ (self-reliant India) and the new operation control centre in Prayagraj is one of the best control centres in the world.”

“The Operation Control Center in Prayagraj is also a symbol of the new power of the new India. Anyone will be proud as the management and data technology used in the control centre has been prepared in India,” he said.

Modi also emphasised that “infrastructure” is the biggest source of the country’s development.

The Prime Minister said the connectivity is the nerve of the nation, and if the nerves are in better shape then the health and prosperity of the nation is much higher.

He said that today, when India is moving fast towards becoming the biggest economic power of the world, “then the best connectivity is the priority of the country”.

“With this ideology, we have worked on every aspect of modern connectivity in the country over the last six years,” Modi said.

The Dedicated Freight Corridor (DFC) is one of the largest rail infrastructure projects undertaken by the government. The overall cost is pegged at Rs 81,459 crore.

In the first phase, the organisation is constructing the Western DFC (1,504 route km) and Eastern DFC (1,856 route km) spanning a total length of 3,360 route km.

“These special corridors for freight trains would ensure passenger trains run on time. It will also ensure that carriage trains can run at thrice the speed and they will be able to carry double load capacity,” Modi said.

Modi said the freight corridors will be a very big mode for self-reliant India, whether it is industry, trade or business, farmer or consumer, everyone is going to benefit from it.

He said the ‘Kisan rail’ would also benefit from these freight corridors.

The 100th Kisan rail has just started. With the launch of this freight corridor, Kisan rails would run faster, he said.

Prime Minister Narendra Modi on Tuesday hit out at previous governments for delaying the Dedicated Freight Corridor project of the Railways and said his government engaged with stakeholders to speed up the work.

The project was given permission in 2006 but it was only on paper as the then government lacked the seriousness and urgency with which it had to to take it up with the states, he said after inaugurating the New Bhaupur-New Khurja section of the Eastern Dedicated Freight Corridor via video conferencing.

Till 2014 not a single km track of the project was laid and the funds sanctioned could not be spent properly. After 2014 ,it was restarted and officials asked to take it forward and by then the budget had gone went up 11 times, the Prime Minister said

The prime minister said that on coming to power, he personally monitored the project and held a dialogue with the stakeholders and got new technology as a result of which about 1100 km work will be completed in next few months.